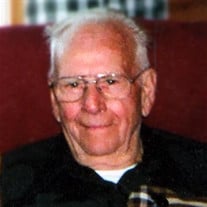 William J. Ricker, age 90, went to his much awaited heavenly home on June 13, at Park Gardens home located at Fergus Falls, Minnesota. He had resided there since August 20, 2018. Bill was the last of eleven children born to Carrie and Walter Ricker born on April 29, 1929. His siblings have all preceded him in death. Bill attended school in in Moorhead, Minnesota and graduated from Moorhead High School in 1948. He began working at Cass Clay Creamery in Fargo not long after high school and in time was the production foreman. Bill married the love of his life, Carol Nelson, in August of 1948. They were known everywhere as the "Love Birds" and also as "Mr. and Mrs. Pickles". They resided in Moorhead until 1968 when they moved to Casselton, North Dakota, where Bill had a car wash, ReNeet, built and started a dairy products delivery service, Casselton Dairy Service. After retiring from Cass Clay, Bill enjoyed his free time at his Lake Pelican home. After selling the Casselton home, the lake home gave him and Carol many happy years of life. Some very serious heart trouble and the on-going deterioration from Alzheimers took over Bill's body and mind making it necessary to move him to a home. He adjusted well and loved living at Park Gardens. He passed away peacefully with his beloved sun lighting up his face. William leaves his wife, Carol, married for seventy years. He is also survived by his daughter, Colleen (Gordon Schmidt) of Florida; son Ross, of Mapleton, North Dakota, and son, Randy, (Brenda) of Bloomington, Minnesota. There are five grandchildren and fourteen great-grandchildren who will miss Granpa Bill deeply. Preceding him in death was his son, Reed William, and Reed's wife, Anita. Bill loved to fish, hunt, and play Scrabble. He loved the simple life and he had a wonderful one. He attended the Pelican Baptist Church, loved his God deeply. Rest in peace. There was no funeral service as requested by the deceased. A family gathering was held at Park Gardens.

William J. Ricker, age 90, went to his much awaited heavenly home on June 13, at Park Gardens home located at Fergus Falls, Minnesota. He had resided there since August 20, 2018. Bill was the last of eleven children born to Carrie and Walter... View Obituary & Service Information

The family of William Joseph Ricker created this Life Tributes page to make it easy to share your memories.

William J. Ricker, age 90, went to his much awaited heavenly...

Send flowers to the Ricker family.