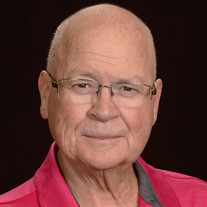 William “Bill” Gibson passed away August 17, 2019 at Sanford’s Palliative Care Unit, Fargo, ND. Bill was born July 27, 1950 to Ralph and Evelyn (Nelson) Gibson. He graduated from Mapleton High School. He was captain of the football team and was class president. It was always a family joke because his graduating class had only 16 students. He attended Mayville State University and on November 20, 1971, he married Diane LaPash at Messiah Lutheran Church in Fargo. Bill farmed and in the winters, he worked for Prishman Electric, Casselton and Cross Electric, Mapleton, and Interstate Seed, West Fargo. When he gave up farming, he moved his family to Fargo, where he started driving for Pan O Gold. He retired after 35 years. Bill didn’t want to give up driving, so he then worked for West Central, delivering farm chemicals and the Kindred Elevator, moving grain. Bill was also active in the ND Air National Guard for eight years and served as Vice President of the Mapleton School Board. He was past Master of the Casselton Masonic Lodge, Fargo Shrine, longtime member of Messiah Lutheran Church and sang in both the men’s and senior choirs. He was an avid reader, reading three books a week, a history buff, especially WWII and enjoyed NASCAR, with his son in law, and summers at the lake. Bill was also a season ticket holder for NDSU Bison Football for many years and an avid fan. The past four winters, Bill and Diane wintered in Indio, California. He loved the time they shared there and all the friends they made. He coached his son’s baseball team when they won state championships. He drove the boys to regionals in the VFW bus to Scott’s Bluff, Nebraska. He loved following both Trevor and Amanda’s soccer teams and Amanda’s dance. He would bus the kids to Minneapolis to Valleyfair for church and also chaperoned for the National Lutheran Youth Convention in Atlanta. Bill cherished all the time he was able to partake in both Trevor and Amanda’s activities. His greatest joy was welcoming his three grandchildren and spending all the time he could with them. Bill’s focus was his family; children and grandchildren meant everything. Bill is survived by his wife; son, Trevor (Kelsey) Gibson, Minneapolis, MN; daughter, Amanda (Scott) Glasoe, Fargo, ND; grandchildren, Oliver, Quinn, and Charlize Glasoe; brother, Rick Gibson, Boise, ID; brother in laws, David (Berniece) LaPash, Clitherall, MN, Thomas (Jana) Rockne, Travers City, MI; and many nieces and nephews. He was preceded in death by his parents Ralph and Evelyn Gibson, father in law Robert LaPash, mother in law Thenora and Glen Rockne, and nephew Mikkel Rockne. Bill’s family would like to thank the staff at Sanford and Roger Maris Cancer Center for the great care they gave him. In lieu of flowers, memorials are preferred to the family.

The family of William Ralph Gibson created this Life Tributes page to make it easy to share your memories.

Send flowers to the Gibson family.