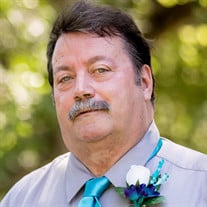 William “Bill” Hughes, 63, of Fargo ND. Bill was born on March 1, 1957, to Dorothe and John (Jack) Hughes in Oxford, Pennsylvania. He graduated from Oxford high school while also attending tech school at Chester County Vocational-Technical School in Coatesville in 1975. He then joined the United States Air Force in August of 1975. He was stationed at Minot Air Force Base in Minot, ND. While in the air force, he met the love of his life, Cleo Keller, in 1977. They were married in Fargo on April 19, 1980. Bill and Cleo enjoyed traveling throughout the country together and enjoying married life together. They later built a home in Fargo and had one child, Jennifer. Bill was a loving husband and father who enjoyed watching racing, riding motorcycles, listening to classic rock, and riding roller coasters with his daughter. He loved traveling across the country via road trips, especially to Perdido Key in Florida and riding around in the country on his motorcycle. He would put over 100 miles a day on his motorcycle during weekends in the summer months. Bill worked as a pressman at Kayes Printing and went on to be head pressman at Davon Press. He took a few years off of work to help with raising his daughter. He eventually went on to working for Tru North Steel in Fargo, where he worked as a Schedule Planner. Bill passed away on Monday, October 5, 2020, at Essentia Health. He will be missed by all who knew him. He is survived by his wife, Cleo Hughes; daughter, Jennifer (Patrick) Shupe, and grandson Zander. Bill is preceded in death by his parents Dorothe and John (Jack) Hughes SR, brother John Hughes JR. A private graveside service will be held at 2 PM, Thursday, October 8, 2020, at Fargo National Cemetery, Harwood, ND.

The family of William "Bill" Thomas Hughes created this Life Tributes page to make it easy to share your memories.

Bill was born on March...

Send flowers to the Hughes family.