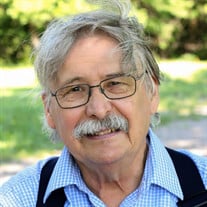 Bill's Funeral Service can be viewed here: https://vimeo.com/465438819 William “Bill” Peder Eide was born on May 3, 1947 to Porter Eide and Doris Hudson-Eide in Fargo, North Dakota. After graduating from Central High School, he obtained a degree in Architecture from North Dakota State University. He worked as an architect, building inspector, and zoning inspector and was best known in the field for his professionalism and integrity. Before taking on the role of husband and father, Bill spent much of his free time with his first love, classic cars. He worked as a mechanic on a pit crew for an international racing circuit. He often spent his weekends traveling throughout the United States and Canada, devoting hours to the preparation and maintenance of the vehicles. When not at a meet, he enjoyed fixing and modifying his own vehicles. He married Barbara Jane Lantz on December 31, 1988 in Aberdeen, South Dakota. Together they raised four kids, which Bill believed was his greatest accomplishment in life. He shared his love of reading with his kids by reading to them nightly. He did not believe there was a book too long or subject too complicated that should be avoided, encouraging the imagination, and jump starting a lifelong love of reading. Bill was a true Renaissance man and had numerous skills to pass on, including woodworking, mechanics, plumbing, sewing, and cooking, just to name a few. He enjoyed making others laugh (and sometimes groan) through his unique sense of humor, and never failed to impress with his seemingly unending knowledge of obscure trivia. When not spending time with his wife and kids, he could often be found doting on his beloved dogs. He was an active member of Edgewood United Methodist Church, where he served on numerous boards. After the closure of Edgewood, he began attending Faith United Methodist Church. His devotion to his faith and generosity towards others made him an invaluable member of the church. Bill passed away on Wednesday, September 30, 2020 at Sanford Hospital. He will be missed by all who knew him, but we take comfort in knowing that every tear we now shed was well worth the moments we had with him. He is survived by his wife, Barbara Eide; kids: Julie Hoffman, Bret Tallman, Kimberly Lantz (Andrew Stalboerger), and Amanda Eide; his grandkids: Alexis Kurle (Ryan), Paige Hoffman, and Noah Hoffman; and a great-granddaughter, due in December.

The family of William "Bill" Peder Eide created this Life Tributes page to make it easy to share your memories.

Send flowers to the Eide family.