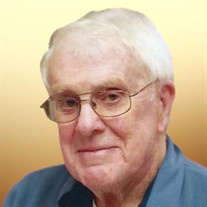 Wilbur John Boldt, 96, passed away on July 24th at Lilac Homes in Dilworth, Minnesota. He was born in Fargo, ND on June 3, 1925 to John D. Boldt and Esther (Schumacher) Boldt. His family moved to Jamestown, ND where he grew up with his two sisters Lois and Dolores. Wilbur worked with his father at the butcher shop while going to school in Jamestown. Winning a reading contest in grade school began his love of books and learning. Wilbur could always be found with a book about nature or North Dakota history and if you were willing to listen, he could spend hours discussing what he read. He graduated from Jamestown High School and Jamestown College in 1949. He continued his education at Iowa State College, graduating with a Masters Degree in Wildlife Management. Wilbur met the girl of his dreams upon his return to Jamestown. He married Leona Worms on July 26, 1953 in Clyde, ND. Together they had two daughters whom he was very proud of. He always commented about how lucky he was to have such a wonderful family. During their 66 years of marriage they spent time doing the things they loved like traveling, fishing, gardening and just being together. Wilbur worked for the North Dakota Game and Fish department as a habitat biologist, project leader and Deputy Commissioner from 1957 to 1979. During this time, he made many lifelong friends who enjoyed hunting and fishing as much as he did. In 1979 he accepted a position with the Colorado Division of Wildlife, where he worked until his retirement in 1988. Wilbur was active in many conservation organizations including the Wildlife Society, Ducks Unlimited, the Isaac Walton League and served as president of the North Dakota Chapter of the Wildlife Society. He was respected in his field for his contribution to wildlife management and in 1986 a 160 acre wildlife management area near Center, ND was named after him. In 1996, he and Leona moved to Fargo to be closer to family. They were active in Hope Lutheran Church and volunteered for many organizations over the years. Wilbur loved spending time with his grandchildren. Wilbur is survived by his daughters Barb (Steve) Parmer, Sandie Jepsen; grandchildren, Ethan Parmer, Hanna Jepsen, Clara Jepsen, Ben (Leah) Parmer, Alyssa (Brett) Gilbertson; four great grandchildren, his sister- in- law Sharon Lilleberg (Jim Onerheim) and many nieces and nephews. He was preceded in death by his wife, Leona; parents, John and Esther, his sisters Dolores and Lois, and his son-in law Michael Jepsen. Wilbur's family would like to thank the staff at Lilac Homes and Hospice of the Red River Valley for the loving care they provided him during his last days. There will be a private family memorial service held at Hanson-Runsvold Funeral Home. Burial will take place at the Clyde Cemetery in Clyde, ND. In lieu of flowers, the family welcomes donations to Hospice of the Red River Valley.

Wilbur John Boldt, 96, passed away on July 24th at Lilac Homes in Dilworth, Minnesota. He was born in Fargo, ND on June 3, 1925 to John D. Boldt and Esther (Schumacher) Boldt. His family moved to Jamestown, ND where he grew up with his two... View Obituary & Service Information

The family of Wilbur John Boldt created this Life Tributes page to make it easy to share your memories.

Send flowers to the Boldt family.