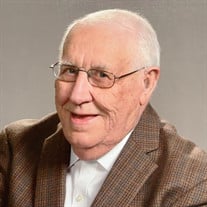 Wesley's service will be live-streamed here at 2pm, Saturday, March 20: https://www.facebook.com/stjohnfargo/live Wesley's tribute video can be viewed here at the following link: https://www.tributeslides.com/tributes/show/JD78BNYQ7K726L44 Wesley Dean Myhre, age 87, passed away on Monday, March 15, 2021 surrounded by family. Wes was born in Richland County, ND on October 31, 1933 to parents Fritjof and Elenora Myhre. He graduated from Walcott High School in 1951 and from NDSCS in 1953 with an Associate's degree in Engineering. He served in the military from 1953 to 1955 and then joined the US Postal Service as a railway carrier based out of Fargo. In 1957, Virginia Gwendolyn (Gwen) Bratland captured Wes' heart and they married on June 22, 1958. Together they raised a family of four children enjoying camping, scouting, horseshoe, and time with extended family. Sadly, Wes lost his beloved Gwen in 1981. Wes worked for the US Postal Service in various engineering and supervisory roles until his retirement in 1989. After retirement he enjoyed a plethora of interests including: woodworking, auctions, collectables, ebay buying/selling and travel. Wes was very active with the ND Democrats including a run for state house in 1992. As a longtime faithful member of St John Lutheran Church, Wes served on committees and in numerous volunteer roles. He treasured his wide circle of dear friends from church, fraternal groups, work, hobbies and neighborhood. Wes is survived by four children: Mark (Patty) Glen Ellyn, IL; Jon (Dione) Riverside, CA; Jane Phoenix, AZ; Paul (Krista) Brooklyn Park, MN, six grandchildren: Nick (Grace); Sara (Jordan); Justin; Gwendolyn; Elise; Garrison, and many loved brothers-in-law, sisters-in-law, cousins, nieces, and nephews. Visitation will be from 5-7 p.m. Friday, March 19, at Hanson-Runsvold Funeral Home in Fargo. A funeral will be 2 p.m. Saturday, March 20, at St. John Lutheran Church in Fargo. The service will be live streamed on the funeral home's website.

The family of Wesley Dean Myhre created this Life Tributes page to make it easy to share your memories.

Wesley&#39;s service will be live-streamed here at 2pm, Saturday,...

Send flowers to the Myhre family.