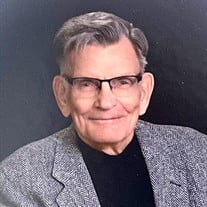 Wayne's funeral service will be live streamed here. https://vimeo.com/682538129 Wayne's tribute video can be viewed here. https://www.tributeslides.com/tributes/show/34P6NNPSYLCS5T32 Wayne O. Solberg passed away quietly in his sleep on Monday, February 21, 2022. He had been battling pneumonia off and on for over two months. Wayne was many things in his life: architect, engineer, pilot, builder, attorney, businessman, traveler, outdoorsman, and adventurer. More than anything else, he was a superb husband, father, grandfather, and great-grandfather. He excelled at everything he did, in every aspect of his life. Wayne was born on April 4, 1932 to George and Olga Solberg, on a farm outside Aneta, North Dakota. He grew up in Aneta, attending school and working on local farms through the war years. He graduated from Aneta High School in 1950. On August 26, 1950, he married his high-school sweetheart, Patricia Lind. This was the beginning of a wonderful life together, spanning over 71 years. That fall, Wayne began his studies at Concordia College but transferred to the North Dakota Agricultural College (NDSU) after one year, where he enrolled in Architectural Engineering. In 1953, Wayne joined the North Dakota Air National Guard as a 2nd Lieutenant pilot trainee. He and Pat left North Dakota and moved south to Texas, Nevada and Florida to attend pilot training. Wayne graduated, was awarded his wings in Class 55T, and returned to North Dakota to serve in the NDANG for the next 31 years, retiring as a Colonel in 1986. He also returned to school to finish his bachelors and masters degrees in Architectural and Civil Engineering. Upon graduation from college, Wayne went to work for the Portland Cement Company in Fergus Falls. In 1963, Wayne decided he wanted a change of career and enrolled in Law School at the University of North Dakota. Upon graduation in 1966, he founded the Solberg Law Firm on South University Drive where he worked for the next 31 years until his retirement in 1997. His law practice included serving as the Fargo City Attorney for twenty-six years. Wayne and Pat loved to travel and made it to the far corners of the globe: China, South Africa, New Zealand and Australia, Alaska, many locations in Europe, and many other points in-between. They enjoyed every trip and went on many excursions with Wayne's cousins, Paul & Gaye Kloster and Ron & Jan Kloster. They especially enjoyed visiting Norway, a country they travelled to a number of times. Wayne's heritage was 100% Norwegian and he seldom let anyone forget that fact. As part of their traveling experience, they became bikers; they loved to travel across North America on motorcycle, riding thousands of miles across the United States and Canada. Wayne was a designer and builder; together, Wayne and Pat built two homes in Fargo, a lake cabin for Pat's parents, and their own summer mountain home in Cooke City, Montana. If something needed to be built, he could, and would, design and construct it. Wayne and Pat were of strong faith. They have been members of Messiah Lutheran Church in Fargo since 1964. They had many friends, coming from all the pieces of their lives; engineering school, the military, law school, church, and numerous other sources. In 1956, while still in school, Wayne and Pat started their family with the birth of their first of six children. Their six children eventually led to twenty grandchildren and six great-grandchildren. This family was the centerpiece of Wayne and Pat's life; they thoroughly enjoyed spending time with their children, grandchildren, and great-grandchildren; especially at their vacation home in Cooke City, Montana. Wayne was a GREAT husband, father, grandfather and great-grandfather who behind left several family legacies, among them: (1) his military service, which was continued by all six of his children, three of their spouses, and 8 of his grandchildren & spouses; (2) the wanderlust and sense of adventure that Wayne and Pat instilled in their children and grandchildren; and (3) last, but most importantly, he instilled a love of the outdoors and for mother nature in all of his children and their children through many, many family outings in the Cooke City area. Earlier in life, he thoroughly enjoyed hiking, fishing, and camping with all his family members and friends; in his later years, he loved sitting on his deck with family and friends, watching the sun go down on Mount Republic, and enjoying the company. Wayne is survived by Patricia, his wife of 71+ years; son Ron (Dawn) of Fargo, daughter Mary (Dave) Griffin of Fargo, son Dan (Kim) of Fargo; daughter Becky (Al) Dohrmann of Bismarck, daughter Bobbi (Tim Laney) Solberg of Fargo, and daughter Jennifer (Steve) Shawver of Colorado Springs, Colorado; nineteen grandchildren; six great-grandchildren; sister Betty Cantler of Fargo; brother-in-law Jack (Bonnie) Lind of Dent, Minnesota; sister-in-law Marilyn Short of Aneta; and numerous nephews and nieces. Wayne was devastated when he learned of the death of his grandson Peter Griffin, in December 2021. Wayne was preceded in death by his parents, George and Olga, and Pat's parents, Jack and Vera; grandson Peter Griffin; brothers-in-law Ron Cantler and Wayne Short; nephew Marty Cantler; nieces Dawn Short and Valerie Bliss, as well as numerous uncles and aunts. He was a truly great guy who was well respected by all those who knew him. He had a strong will, a sharp mind, deep faith, a heart of gold, and a huge love for his entire extended family. He will be greatly missed. In lieu of flowers, please send donations to the Messiah Lutheran Church "Hour of Worship", PO Box 1562, Fargo, ND 58107 Funeral Service: 1pm, Monday, February 28, 2022 at Messiah Lutheran Church, Fargo, ND with a visitation one hour prior. The service will be livestreamed on the funeral home website. Interment: Messiah Lutheran Church Columbarium, Fargo, ND Condolences and memories may be shared at www.hansonrunsvold.com Arrangements by Hanson-Runsvold Funeral Home - Fargo, ND

The family of Wayne Obert Solberg created this Life Tributes page to make it easy to share your memories.

Send flowers to the Solberg family.