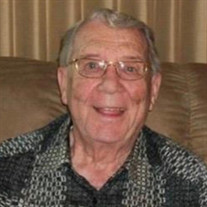 Wayne's funeral service will be livestreamed here on Friday, August 14 at 2pm: https://vimeo.com/446607214 Wayne Saar passed away peacefully from natural causes on August 8, 2020. Wayne Russell Saar was born January 29, 1928, to Ben and Anna Saar in Davenport, ND. He grew up on a farm just south of Casselton, attending a one room schoolhouse near their farm and then attended school in Casselton. He spent the early 1950's, in the Air Force, during the Korean war and was stationed in Texas, New York and Iceland. He married Gail Melting on December 30, 1955. They were married for 58 years, until her death in 2014. Their favorite date nights for 20 years were spent at Basie's listening to the jazz music of Kathie Brekke and the 42nd Street Jazz Band, with Wayne continuing to go with his daughters as often as possible until late 2019. After his time in the Air Force, Wayne graduated from Interstate Business College and then worked for O'Lavin Travel, followed by Reed Travel. In 1958, Gail joined him in the travel business and they worked together for the next 50 years. They always said they had the best job, as they got to see the world plus help others experience the same. They finally retired in 2008, but he kept on with his Chamber of Commerce Ambassadors ribbon cuttings, which he loved, was named Ambassador Emeritus and had the Ambassador of the Year Award named after him. They lived in the same North Fargo house for over 50 years, where Wayne loved joking with the neighborhood kids, who called him "funny daddy." He loved gardening, had a million stories to tell, many involving their travels. He was in Mexico City during a 7.6 earthquake and was on a flight to Australia which was on a collision course with Skylab falling back to earth, to name but two. His love of music lasted throughout his life, playing the piano, listening to jazz and classical music, and was a supporter of the former Jazz Arts Group and KDSU. He loved his cars starting with his green Ford convertible with a green top, to his 1966 Mustang convertible, which is still in the family. Wayne was known as a sharp dresser, and above all he is remembered as a kind and generous man who loved life. Wayne is survived by his daughters, Cynthia Saar (Scott Kjonaas), Karen Schur (Steve Schur), Kirsten Carroll (Brian Carroll), grandchildren, Courtney Schur (Charles Sterling), Erika Jaymes, Madison, Micah and Abby Carroll, great-granddaughter Rayna Jaymes and sister Shirley Nelson of Westminster, CO. Our family would like to extend a special thanks to the staff at Eventide on 8th in Moorhead for taking such good care of our father. A private funeral service will be held at 2pm, Friday, August 14, 2020 and will be streamed on-line at https://vimeo.com/446607214 and will be available for viewing at anytime later. Burial will be at Sunset Memorial Gardens, Fargo. Memorials can be made to Eventide on 8th in Moorhead, Goshen Moravian Church, Casselton, or Zion Lutheran Church - Zionlca.com. Wayne's Tribute Video can be viewed here: https://www.tributeslides.com/tributes/show/3F279X8M9D73X7ST

The family of Wayne Russell Saar created this Life Tributes page to make it easy to share your memories.

Wayne&#39;s funeral service will be livestreamed here on Friday,...

Send flowers to the Saar family.