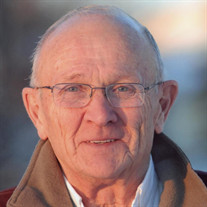 Odin's service can be viewed here: https://vimeo.com/445016317 Odin was born in Mayville, ND on June 11, 1934 to Walter T. and Gerda (Urness) Dahl. They lived in Mayville where his father operated the “Corner Café”. The family moved to Roseau, MN where they owned the “Gray Inn”. Odin’s father was killed in a car accident in 1943 and the family moved to Devils Lake where he graduated from in 1952. During high school, he played hockey, basketball, football and Jr. legion baseball. He also played hockey at UND for two years and was a member of Phi Delta Theta Fraternity and ROTC. He graduated in 1956. Odin served in the U.S. Army Armored Division and discharged as a 1st Lt. He married Sandra Jensen on July 31, 1961. He was also a member of First Lutheran Church in Fargo, F.M. Sertoma Club, Lion’s Club and Fargo Elks Club. and He was in insurance sales for 43 years with an agency in Fargo. He also was executive director for the ND Architects. Many will remember Odin as a hockey coach for youth. His involvement with hockey led to being elected to the Fargo Park Board and served as President. During those years, he saw Trollwood Park develop and the Southside arena, the first soccer field in FM and the swimming pool at Island Park. He also volunteered for the YMCA youth. In 2001, he worked for the Red Cross for 9-11 in NYC and several disasters after that. His favorite hobby was fishing at Churchill River in Canada. Odin and Sandi traveled extensively for 20 years doing art festivals with Sandi’s paintings. Odin is survived by his wife, Sandi Dahl of Fargo, ND and Son, David Dahl of Moorhead, MN and sister-in-law Pauline Jensen, brother-in-law Ronald Jensen and many nieces and nephews. Odin is preceded in death by his parents, sister, Sonja Eggmann, son, Kirk Dahl and brothers-in-law Douglas Jensen and Gary Jensen. Memorials are preferred to the charity of the donor’s choice. We ask that all attending Odin’s service to please wear a mask. View Odin's Tribute Video here: https://www.tributeslides.com/tributes/show/8S66MB4BBNHNN3C3

The family of Walter "Odin" Dahl created this Life Tributes page to make it easy to share your memories.

Send flowers to the Dahl family.