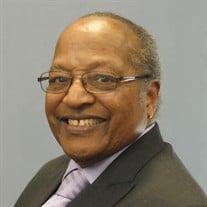 Rev. Walter McDuffy, 92, beloved husband, father, father-in-law, and Pastor, passed away on Monday, September 16, 2019 at Bethany Retirement Living in Fargo, ND. Walter Nathaniel McDuffy, Jr. entered this world on November 29, 1926 in Chicago, IL. Walter served in the United States Air Force from 1945-1949 and later served honorably as a Chaplain Lieutenant Colonel for 28 years, retiring in 1981. Walter married Regina “Jeannie” Smith on December 25, 1955. Walter served the First Baptist Church congregation in Fargo, ND for many years. He served as Assistant Dean of Intercultural Affairs at Concordia College in Moorhead, MN. Leading by example, he served as a community activist for social justice all of his life. From participating in the march on Washington, ministering to those who were shut in and in need in the community, to filling sandbags during the floods in North Dakota; compassion, commitment and hard work were lessons he learned from his father which carried throughout his life. He was a great believer in serving the Lord by serving the community. Walter is survived by his daughters, Dianne McDuffy, Brooklyn Park, MN; Linda (Nick) Wolf, Hinckley, MN. He was preceded in death by his wife, Regina and son, David. In lieu of flowers, memorials are preferred to First Baptist Church in Fargo, ND.

The family of Rev. Walter Nathaniel McDuffy Jr. created this Life Tributes page to make it easy to share your memories.

Send flowers to the McDuffy family.