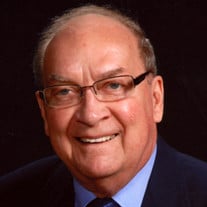 Wallace Roy Lueck, 78, passed on Saturday, May 4, 2019 at Rosewood on Broadway, Fargo, ND. Wally was born September 5, 1940 to Roy and June (Grotta) Lueck in New Ulm, MN. Wally considered it a privilege to grow up in a town like New Ulm. He attended both parochial and public schools. He graduated and signed on the dotted line that he “wanted to see the world” and joined the Navy. And see the world he did. Wally went in as a boot recruit and worked himself up the ranks to Lieutenant. He served on four ships, the USS Haynsworth, Wilkinson, Graham County and Saratoga. He spent three years in Naples, Italy, other duty stations as well as starting up the Fargo Navcruit District. Wally loved the Navy his entire life. He married Dianne (Sperl) in 1966 and they had two children, Jeffrey and Rebecca. After retiring from the Navy, he worked for Johnson Controls for many years. Active as a Scoutmaster in the Boy Scouts for many years, he loved working with the boys and really missed camping when he left Scouting. He was involved in several military organizations as Past Commander of the Fargo American Legion, President and Charter Member of the Fleet Reserve Association, President and charter Member of The Retired Officers’ Assoc., President of the Optimist Club and Lions Club. He felt fortunate to have seen and done all that he did – he was a private pilot, skied the Alps, skin dove in the Mediterranean to name a few. He married Diane (Hersrud) in 1996 and worked for H. A. Thompson and Sons. They moved to Bismarck and returned to Fargo upon retiring in 2000. To keep busy, they started a small ATM business and had fun doing this as well as traveling through all the lower 48 states as well as Mexico, Europe and England. They were lucky to be retired at the times of their daughters’ weddings, their grandchildrens’ births and activities. Wally and Diane had a reputation for their love of British mysteries. Wally had a very strong Christian faith. He served his church as well as being on the Board of his dear Grace Lutheran School. He was a very kind and generous man and will be missed by all who knew him. Wally is survived by his loving wife Diane, his daughters Rebecca (Dr. Jon) Rosenson, Berkeley, CA; Lisa (Chad) Bakken, Wimbledon, ND; Jacqueline (Justin) Grams, Fargo, ND; his brother Richard Lueck, New Ulm, MN; his grandchildren Sarah and Alex Rosenson, Dylan and Kaitlyn Bakken, Lyndon Holm, and Ava Grams. He is preceded in death by his parents, his brother Jerome, his son Jeffrey and grandson Jacob. Memorials preferred to Grace Lutheran School or Mainstreet Living.

Wallace Roy Lueck, 78, passed on Saturday, May 4, 2019 at Rosewood on Broadway, Fargo, ND. Wally was born September 5, 1940 to Roy and June (Grotta) Lueck in New Ulm, MN. Wally considered it a privilege to grow up in a town like New Ulm.... View Obituary & Service Information

The family of Wallace Roy Lueck created this Life Tributes page to make it easy to share your memories.

Send flowers to the Lueck family.