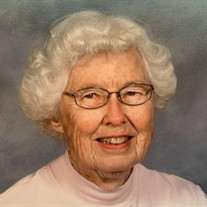 The family of Virginia V. Stewart sadly announces her passing on Tuesday, February 23, 2021, at Edgewood Vista in Fargo at the age of 98, under the care of Edgewood and Hospice of the Red River Valley. Virginia was born January 22, 1923, to George and Alta (Cotton) Wheat in Marshalltown, IA. She grew up in Marshalltown and was the valedictorian of her high school class. After attending business college, she worked in the Girl Scout office and the public library in Des Moines, IA. On March 15, 1946, she married Robert (Bob) Stewart, who passed away in 2007 shortly before their 61st anniversary. She and Bob lived in Ames and Des Moines, IA, Omaha, NE, and Minneapolis (Edina), MN, before moving with their two children to Fargo, ND, in 1965. Virginia (Ginny) was an active member of Faith United Methodist Church in Fargo. Besides being a homemaker, she did secretarial work for her husband’s company and volunteered for Meals on Wheels and United Blood Services. She was often on the go to support her children by attending sports, music, and theatre events, and she was a long-time patron of Straw Hat Summer Theatre as well as a number of local charities and organizations. She and her husband participated weekly in couples bowling leagues from 1960-1984. Virginia especially enjoyed reading, dining out, and traveling with family and friends. She visited many countries and nearly every state in the U.S., and she and Bob made Scottsdale, AZ, their winter home for several years. She loved Arizona’s warm, dry climate, looking forward each year to her time there. Throughout her long life, she constantly saw the good in everyone. Her cheerful, always optimistic outlook on life will be greatly missed. In addition to her husband, Virginia was preceded in death by her parents, her sister and brother-in-law Maxine and William Young, and her niece Judith Reeves. She is fondly remembered by her children Jeff (Margaret) Stewart, Apple Valley, MN, and Beth (Jerry) verDorn, Sparta, NJ; and her grandchildren Anne (David) Cooke and Elizabeth (Doug) Briese, Omaha, NE, Jake (Laura) verDorn, Saunderstown, RI, and Peter (Erin) verDorn, Ponte Vedra, FL. She is also survived by her nephew Jay (Karen) Young and family, North Branch, MN; her great-niece Amy (Mike) Sever and family, Tempe, AZ; and six great-grandchildren: Andrew, Daniel and Jonathan Cooke, Benjamin, and Nora verDorn, and Penelope verDorn. The family wishes to thank Edgewood Vista and Hospice of the Red River Valley for their skillful care. Memories and condolences can be shared at www.hansonrunsvold.com, and memorials may be directed to Faith United Methodist Church, Hospice of the Red River Valley, or a charity of your choice. A private memorial/celebration of life is planned for a later date. Virginia will be laid to rest alongside her husband and other family members at Prairieville Cemetery in Marshalltown, IA.

The family of Virginia V. Stewart sadly announces her passing on Tuesday, February 23, 2021, at Edgewood Vista in Fargo at the age of 98, under the care of Edgewood and Hospice of the Red River Valley. Virginia was born January 22, 1923, to... View Obituary & Service Information

The family of Virginia Stewart created this Life Tributes page to make it easy to share your memories.

The family of Virginia V. Stewart sadly announces her passing...

Send flowers to the Stewart family.