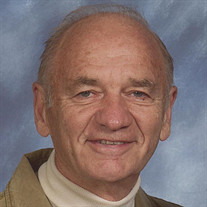 Virgil's Tribute Video can be viewed here: https://www.tributeslides.com/tributes/show/JP9H4WHYQS694BKP Virgil Hilborn, 93, of Fargo, died at Rosewood on Broadway on Wednesday, May 13, 2020 due to complications from the coronavirus. Virgil Dale Hilborn was born to Henry Franklin and Alma (Bartz) Hilborn on May 25,1926 in Deer River, MN. He attended schools in Jamestown, Spiritwood, Fargo, and Enderlin. In 1944, Virgil joined the Army at the age of 18. He served in the Pacific Theater in WWII as a gunner on an aviation fuel tanker and was honorably discharged in 1946. He returned to North Dakota where he worked on the Northern Pacific Railroad as a rail repairman. He then attended Wahpeton State School of Science from 1947-1949 where he studied auto body repair. From 1949-1950, Virgil worked as a collision repairman at Central Motors in Jamestown. It was during this time that Virgil frequented the Melody Cafe where a cute little waitress, by the name of Marian Andrews, caught his eye and his heart. Virgil and Marian were married at St. John’s Lutheran Church in Jamestown on August 1, 1951. As an Army Reservist, Virgil was called to serve during the Korean War in 1950. He was stationed at Camp McCoy, WI where he volunteered for the Airborne Rangers. In 1951, he got his overseas orders and was scheduled to be in San Francisco on August 8, one week after his wedding. After the ceremony and a short honeymoon, he headed west to report for duty. Virgil was stationed in Japan and was honorably discharged in 1952 with a rank of Sergeant 1st Class. He always had a great love for the military. Virgil and Marian moved to Fargo in 1952, where he worked at Overvold Motors (became Selland Motors) until his retirement in 1993. They built their home on 8th Street off of 19th Avenue in North Fargo. They are the last original owners on the block that was initially adjacent to Barnett Field and the Red River Valley Fairgrounds. Virgil was an enthusiastic North Dakotan, who embraced snow shoveling and 30° below weather. His shoveling skills were legendary and he maintained the most snow-free driveway on Fargo’s North Side. It’s fitting that Virgil’s favorite treat was a Dairy Queen Blizzard. His grandsons have fond memories of riding with Grandpa to the Moorhead Dairy Queen in his spotless 1980 El Camino. Virgil was a man of many talents - an artist and a craftsman who was always busy working on something. He designed and built everything from elaborate home additions and stone walls to furniture and a speedboat. He was a skilled painter and his award-winning Christmas murals were a neighborhood attraction. He even wrote and recorded a song, Silver Lake. There was almost nothing he couldn’t figure out how to do. It wasn’t all work and no play. He loved to travel and took his family on epic road trips throughout the US - his children still remember the snowball fight at Crater Lake in 1966. Virgil and Marian also took many trips as a couple and traveled to Europe three times. He enjoyed both snow and water skiing and enthusiastically shared this passion with others. Dozens of people successfully water skied for the first time with Virgil behind the wheel. He also loved to skate - both ice and roller skating- which he continued into his later years. Virgil was a member of the American Legion, VFW, and the Disabled American Veterans. He joined Peace Lutheran Church in 1952 and was a gung-ho vocalist, whether he was in the choir or congregation. He also made frequent visits to nursing homes and hospitals to brighten the days of friends and family. Virgil will forever be loved and deeply missed by Marian, his wife of 68 years; son Robert (Sharon) Hilborn of San Diego, CA; daughter Diane Hilborn of Yellowstone National Park, WY; and Douglas (Sandra) Hilborn of Gardiner, MT. Grandchildren Zachary Hilborn of Denver, CO; Adam Hilborn of San Francisco, CA; and Nikki Beerthuis-Webb of Gardiner, MT. Brother Russell (Marlys) Hilborn of Valley City, ND; and many nieces and nephews. He was preceded in death by his parents, brothers Lawrence Zaun, Wallace Hilborn, Clayton Hilborn, Richard Hilborn, Lloyd Hilborn, Ray Gordon Hilborn, and Frank Hilborn and sisters Gladys Hoekman, Helen Podenski, Vivian Thomas, Lola Goulding, and Beverly “Betty” Peterson. Due to the Coronavirus, there will be no funeral at this time, but his family hopes to have a service and gathering to celebrate Virgil’s life sometime this summer. Virgil’s family would like to thank the loving, caring staff at Rosewood on Broadway. In lieu of flowers, please send donations in memory of Virgil to The Alzheimer’s Research Foundation (www.alzheimersresearchfoundation.com) or Peace Lutheran Church, Fargo.

Virgil's Tribute Video can be viewed here: https://www.tributeslides.com/tributes/show/JP9H4WHYQS694BKP Virgil Hilborn, 93, of Fargo, died at Rosewood on Broadway on Wednesday, May 13, 2020 due to complications from the coronavirus. Virgil... View Obituary & Service Information

The family of Virgil Dale Hilborn created this Life Tributes page to make it easy to share your memories.

Send flowers to the Hilborn family.