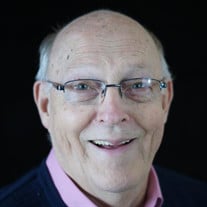 Vernon's Funeral Service will be live-streamed here: https://boxcast.tv/view/vernon-becker-funeral-iknruurk95wsbxf4bac3 Vernon Christ Becker, 85, of Fargo, N.D., died peacefully at home Tuesday, March 9, 2021 surrounded by his family. Vern was born in his childhood home on November 8, 1935 in Moylan Township, Goodridge, MN, to Henry Becker and Dorothy (Cady) Cooper. He grew up on the family farm in Goodridge along with his older brother, Harold, and his sister, Doris. At the age of 4, Vern was diagnosed with polio, which affected his left arm. He spent six months at Gillette Hospital in St. Paul, MN, hospital for treatment and returned multiple times throughout his childhood. At the hospital, the boys slept in a long row and enjoyed listening to "Lone Ranger" on the radio. Despite the lingering effects of polio, Vern was an outstanding basketball and baseball player. During baseball he would use his right hand to catch, stick his glove under his arm, whip out the ball, and still make the play. He once received an award for the highest points scored in a single basketball game. Vern never complained about the impact polio had on his life or said that he could not do something because of it. He simply found a way to make it work. He graduated from Goodridge High School in 1953. He was a member of a singing quartet and enjoyed math and taught himself bookkeeping. Vern was passionate about cars. As a young man, he bought a yellow 1950 Ford convertible with the hopes of picking up girls in it. But the very first night he had it he met the love of his life, Florence Anderson, at a Saturday night dance. They married on June 21, 1958 at Ekelund Lutheran Church in Goodridge and were inseparable for the rest of their lives. Vern and Florence made their home in Cavalier, ND for 46 years before making the difficult decision to leave behind many beloved friends and move to Fargo, ND where they were welcomed by a new group and a found a cherished morning coffee crew. Together they raised four children, Kimberly, Wendy, Kristi, and Chad, and played active roles in the lives of their 10 grandchildren and nine great-grandchildren. In 1965, Vern chose a career in a creamery and worked as a manager in St. Hilaire and later as a manager, butter maker, and milkman in Cavalier. In 1972, Vern began working at a Cavalier car dealership as a salesman and general manager. In 1984, he left to work at a credit union for eight years before returning to the car dealership until his retirement in 1999. Vern enjoyed woodworking, puzzles, playing cards, motorcycles, camping, and family vacations. He considered himself a handyman and built many unique pieces out of wood to customize his home and as gifts for others. He could fix pretty much anything. His love of automobiles lasted a lifetime, and he was always on the lookout for a new vehicle. He was an active member of the church throughout his life. He was baptized and confirmed at Goodridge Lutheran Congregation in Goodridge. He later served on the council and building committee at United Lutheran Church in Cavalier and on the usher team at Hope Lutheran, South Campus in Fargo. Vern was also a Past Master Mason of the Tongue River Lodge Number 22 in Cavalier. Vern considered being married to his wife, Florence, for 62 years to be his biggest accomplishment, along with his four children and numerous grandchildren and great-grandchildren. His family and friends will miss his long hugs, his constant smile, and hearing him say, "You're lookin' good." Vern is survived by his loving wife of 62-years, Florence (Anderson) Becker, Fargo, ND; children, Kimberly Lawonn (Ken), Omaha, NE; Wendy Novak, Moorhead, MN; Kristi Ulrich (Charles), Fargo, ND; Chad Becker (Jane), Andover, MN; grandchildren: Brittany Lawonn (David Brost), Janel Taylor (Reed), Heather Swenson (Eric), Christopher Novak (Brandon Elverud), Larissa Anderson (Roosevelt), Sydney Ulrich, Wyatt Ulrich, McKenzie Cale (Cameron), Haydn Loosbrock (Ben), Lucas Becker; and great-grandchildren: Leila, Clyde, and Lennox Taylor, Sabrina Brost, Sophie Swenson, Skylar Petrie, Jovyn Novak, Trevon Hollinquest, and Elijah Anderson. He was preceded in death by his parents, Henry Becker and Dorothy Cooper, brother Harold Becker, sister Doris Aase, and nephew Gene Becker. Vern had been under the care of Griswold Home Care, Ethos Home Care Services, and Hospice of the Red River Valley. His family thanks his caretakers for their kindness and compassion during this difficult time. Vernon's Tribute Video can be seen here: https://youtu.be/cpyps2D-bZo

The family of Vernon Becker created this Life Tributes page to make it easy to share your memories.

Send flowers to the Becker family.