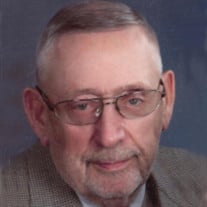 Vern's Funeral Service will be livestreamed at 1pm, Wed. March 31 here: https://vimeo.com/530877427 Vern D. Peterson, 91, of Fargo, N.D., passed away Wednesday, March 24, at Sanford Medical Center. Vern was born November 18, 1929 in Fargo, ND, to Anna and August Peterson. He graduated from Fargo Central High School in 1947. He served two years in the U.S. Army before attending college at North Dakota Agricultural College, now known as North Dakota State University. He graduated with a degree in mechanical engineering and spent two years working for General Electric in New Jersey before returning to Fargo to start Peterson Sheet Metal with his father in 1954. Additionally, Vern was a professor at NDAC/NDSU, where he taught mechanical engineering for 16 years while operating the family sheet metal business, now known as Peterson Mechanical Inc., until his retirement in 2014. Vern married Carolyn Brudevold, the love of his life, on September 28, 1996, at the age of 66. Together, they shared a passion for gardening and spent many joyful days together planning, planting, and tending to their garden and greenhouse. They also shared a mutual appreciation for classical music, regularly attending FM Symphony Orchestra performances. Vern and Carolyn spent most of their winters together at their second home in Cullman, Alabama, where they cultivated lasting friendships within the community. Vern is survived by his younger brother, Darold (Judy), of Moorhead, MN, his nephews, Greg (Carol) Peterson of Sioux City, IA, Mike (Valerie) Peterson of Fargo, ND, and Joel (Denise) Peterson of St. Paul, MN, nieces Julie Curry of Vernal, UT and Penny (Brian Harmsen) Barnett of Moorhead, MN, and eight great-nephews. He was preceded in death by his beloved wife, Carolyn, his parents, August and Anna Peterson, his sister, Audrey Peterson, and his brother, Marvin Peterson. Vern's Tribute Video can be seen and copies ordered here: https://www.tributeslides.com/tributes/show/SG6FCHNK39D65ZTT

The family of Vern Deweine Peterson created this Life Tributes page to make it easy to share your memories.

Vern&#39;s Funeral Service will be livestreamed at 1pm, Wed. March...