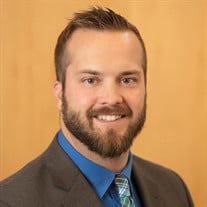 View Travis Anderson's Funeral Service Livestream here: https://vimeo.com/702109559 Travis' Tribute Video can be viewed here: https://www.tributeslides.com/tributes/show/4TMJJQY4YZ4PB8GZ Travis Mark Anderson, 41, of Fargo, ND, with his loving wife by his side, was called home to his heavenly father on April 18, 2022, after a courageous 3-½ year journey with cancer. Travis was born in Austin, MN to Mark and Lori (Herfendahl) Anderson on December 31, 1980. His family moved to Fargo shortly before he was two. Travis’ love for hockey and baseball started at a young age. He developed his skills and love for hockey with the Fargo Flyers program and Burggraf Skating Skills. This was a prelude to a successful high school hockey career at Fargo South High School, where he and his teammates captured the ND High School Championship in 1999. Travis capped his high school hockey career competing for Team North Dakota in the Chicago Showcase, leading the team in scoring. His baseball career started before he took his first steps. Growing up, evenings were filled with baseball drills, batting practice, and a lot of pitching. Travis was a very successful pitcher at every level he played. As a 15-year-old, he helped lead his Babe Ruth team to a state championship. At Fargo South, he contributed to a state championship in 1998 and a second-place finish in 1999. Travis also pitched three years for very successful Fargo Bomber and Legion teams. Along the way, Travis developed many strong friendships. One of his baseball coaches said Travis was a champion in everything he did. Another added Travis turned in some of the grittiest pitching performances he had witnessed. A former hockey coach noted that Travis was one of the hardest working players he ever coached. After graduating high school, Travis attended Concordia College (Moorhead) where he received a B.A. in Physics, Mathematics and Business. He continued his baseball career at Concordia, anchoring strong teams, ranking among the leaders in career pitching wins, and making many friendships that continue to this day. Travis had his initial foray into banking while at Concordia, when he worked part-time for Community First National Bank. After graduating, Travis was an analyst at US Bank and then pursued an opportunity with Microsoft, while obtaining an MBA from the University of Mary. In 2008, Travis met the love of his life, Donna (Frank), and they were married in 2011. They welcomed three beautiful boys: Andrew, Jackson and Ethan. There was nothing more important to Travis than spending time with his family. Travis especially loved sharing his passion of hockey, baseball and Star Wars with the boys. He stayed busy watching and coaching their hockey and baseball teams and partaking in frequent lightsaber battles, Saturday morning snuggles on the couch, and backyard baseball games. Over the next several years Travis would earn a Master of Science degree in Finance from Northeastern University, Boston, MA, and a Certificate of Accounting from UCLA. In 2012, he entered the hospitality industry as an analyst at TMI Hospitality on the strength of his quantitative and modeling skills. In 2016, he was recruited into the Controller position at BlackRidgeBANK, another opportunity to make significant contributions with his unique skillset. His love of the hospitality industry would eventually lead him back to be the Director of Financial Planning & Analysis at Legendary Capital, where he most recently served as Vice President and Portfolio Manager. In 2018, Travis was diagnosed with glioblastoma multiforme (GBM), an aggressive form of brain cancer. Travis lived a life filled with friendships and love, impacting all of those who knew him. Hemingway defined courage as “grace under pressure.” Travis embodied this definition. His grace and courage were evident every day of his battle with GBM, as was his love for his family, friends and fellow GBM warriors. Travis is survived by his wife Donna, their three boys, his parents Mark (Jennifer) Anderson, Lori Anderson, his sisters Jamie Anderson (Larry Larson), Ashley Manly, Alexa (Jared) Mairs, Sawyer Anderson and Sloane Anderson, and his grandmother Bertha Anderson. He is also survived by his nieces and nephews Aspyn, Henley, Jaydee, Tripp, Holland, Indie, Ben, Jessica, George, Larken, Violet, Draven, Layka and Tryker, and many, many close friends. He was preceded in death by his grandparents Andy Anderson, and Sylvia and Jim Herfendahl. Visitation will be Thursday April 28 from 5:00-7:00 p.m. at Sts. Anne and Joachim Catholic Church in Fargo, followed by a prayer service. The funeral will be Saturday, April 30 at 2:00 p.m. at Sts. Anne and Joachim Catholic Church with burial at Holy Cross Cemetery South. In lieu of flowers, please consider making a donation in Travis’ honor to Pray for Gray, a local brain tumor non-profit near and dear to his heart.

The family of Travis Mark Anderson created this Life Tributes page to make it easy to share your memories.