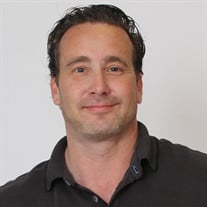 Timothy Charles Johnson, 48, of Fargo, passed away on December 8, 2019 at his home in Fargo, ND due to complications from diabetes. Tim was born June 5, 1971 in Fargo, ND to Darrell and Joyce (Froelich) Johnson. Tim graduated from Fargo North High School in 1989. He then went on to attend Minnesota State University in Moorhead for one year and then decided he would prefer to live some place warmer. In July of 1990, Tim moved to Arizona where he lived until 2015. From 1990-2004 Tim worked at Scottsdale Memorial Hospital in Scottsdale, AZ while also attending college classes in the evenings and weekends. In 2001, Tim received a Bachelor of Science degree in Accounting from the University of Phoenix. From 2004-2015, Tim worked for Valley Anesthesiology Consultants in Phoenix, AZ where he was the head office manager, overseeing the staff schedulers for an anesthesia practice of over 220 anesthesiologists and over 40 nurse anesthetists. During this time, Tim also became a successful Independent Real Estate Agent in Phoenix, AZ with high end clients and large-volume sales and properties. In 2004, Tim met Tammy Lynn Dykstra from Phoenix, AZ and they were engaged on Christmas Eve 2006. Tammy passed away from breast cancer on August 30, 2011 and in Tammy’s honor, Tim became one of the founding members of the Tammy Dykstra Foundation which provides a support system for women diagnosed with breast cancer. In 2015, Tim moved back to the Midwest. Tim lived in Bemidji, MN for one year where he worked for Concordia College Language Villages and then Sathre Title & Abstract Company. In 2016, Tim moved back to his hometown, Fargo, ND to be a full-time caregiver for his father Darrell, who passed away December 8, 2017. In 2018, Tim worked as a Human Resource Director for Casselton Veterinary Services, Inc. in Casselton, ND and in 2019 Tim worked for Corwin Automotive Group in Fargo, ND in the sales department. Tim is survived by his brother, Daniel (Candace) Johnson, Valley City, ND; a sister, Tammy (Paul) Douville, Faribault, MN; and four nephews, Nathan Johnson, West Fargo, ND and Matthew Johnson, Valley City, ND; and Nicholas and Charles Douville, Faribault, MN. Tim is preceded in death by his parents; Darrell and Joyce Johnson, and his fiancé, Tammy Dykstra.

Timothy Charles Johnson, 48, of Fargo, passed away on December 8, 2019 at his home in Fargo, ND due to complications from diabetes. Tim was born June 5, 1971 in Fargo, ND to Darrell and Joyce (Froelich) Johnson. Tim graduated from Fargo North... View Obituary & Service Information

The family of Timothy Charles Johnson created this Life Tributes page to make it easy to share your memories.

Timothy Charles Johnson, 48, of Fargo, passed away on December...