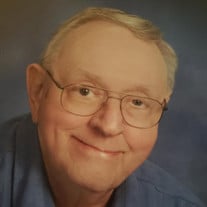 Thomas's memorial service will be streamed here. https://vimeo.com/639722407 Thomas Richmond passed away on Thursday, October 14, 2021, at Bethany on University in Fargo, ND, and was cared for by Ethos Hospice during his last weeks. He was 86 years old. Thom was born in 1935 in Kalamazoo, MI, to Roy and Dorothy Richmond, as the family's youngest sibling. Thom was predeceased by his wife, Audrey, and his son, Roy Richmond, and by his sister and brother-in-law Jean and William Chope and brother and sister-in-law Jack and Marilyn Richmond of Kalamazoo, MI. Thom is lovingly remembered by his daughter, Lisa Richmond, also of Fargo, ND, and by his nieces Debra Hughes (Bill) and Nancie Closson (Dan) and Nancie's children; by his nephew John Richmond (Patty) and their daughter; and by nephew Paul Richmond (now deceased) and his surviving wife Mary VandenBerg Richmond and their children-all of Kalamazoo, MI. Thom showed an early interest in music, especially jazz, and started playing trombone with local bands in clubs while he was still a teenager, sometimes sneaking out of his home at night to do so. He also found that he enjoyed working on various musical groups' arrangements, spanning from combos to full concert-size bands. After a freshman year spent at the University of Michigan, he returned home due to family illness and eventually graduated with a Bachelor's degree in music and education from Western Michigan University in 1956. He taught junior high school English after graduating and served in the U.S. Army from 1957-58, spending time in Germany, where he worked with many different small jazz bands as well as with the U.S. Army Band. He married fellow educator Audrey Meyers in 1960, and the couple soon moved to East Lansing so that Thom could earn his Ph.D. in music composition from Michigan State University. Together the couple had two children, Lisa and Roy (1965-2009). In 1967, Thom took a position with the music department at Concordia College in Moorhead, MN, and the family began its life in Fargo-Moorhead. There he taught music composition courses until retirement in 2000, helping many young people to learn to love scoring and writing music. Several of his compositions have been played by the FM Symphony, as well as by other regional orchestras in the U.S. Thom and Audrey sold their Hawthorne neighborhood home at the outset of their retirement, moving into a condominium near downtown Fargo which was their home until Audrey's death in 2018. Thom and Audrey enjoyed being active members of the FM Unitarian Universalist Church throughout their entire lives in Fargo, having met originally at Kalamazoo's Unitarian congregation. Thomas served on Essentia Health's patient advisory board during his retirement and continued with a lively interest in jazz and contemporary American orchestral and choral music. Thom had a keen sense of humor and, like his spouse, was a great lover of movies and documentaries. His lifelong love of reading was passed down to both his children. A celebration of Thom's life will be held at Hanson-Runsvold Funeral Home at 215 7th Street South in Fargo, ND, on Thursday, October 28. Visitation starts at 10:30 a.m. with the service at 11:00 a.m., followed by a luncheon reception at the same location. In lieu of flowers, memorial gifts may be made to the Unitarian Universalist Church of Fargo-Moorhead or to the American Civil Liberties Union. Condolences for the family may be offered online on the Hanson-Runsvold Funeral Home website, www.hansonrunsvold.com. Arrangements entrusted to Hanson-Runsvold Funeral Home-Fargo, ND.

Thomas's memorial service will be streamed here. https://vimeo.com/639722407 Thomas Richmond passed away on Thursday, October 14, 2021, at Bethany on University in Fargo, ND, and was cared for by Ethos Hospice during his last weeks. He was... View Obituary & Service Information

The family of Thomas Lee Richmond created this Life Tributes page to make it easy to share your memories.

Send flowers to the Richmond family.