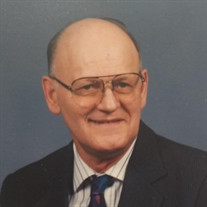 Thomas Vernon Kurtti, age 84, of Fargo, ND passed away Saturday, August 17, 2019 after a lengthy illness. He was born August 29, 1934 in Fargo to Viana and Johanna (Larson) Kurtti. He was baptized at Binford Lutheran Church, attended grade school in Sutton, ND, and graduated from Binford High School with the class of 1952. On June 17, 1955 he married Louise Vrem from Pekin, ND at Sheyenne Lutheran Church. They farmed near McVille, ND for eight years before moving to Fargo in 1964. Tom’s first job was as a Fargo Forum newspaper carrier. During his early years he also worked at a movie theater and at a cream station where he tested cream. Tom graduated from Interstate Business College. He worked for Texaco and Concordia College for many years. Tom and Louise owned the Imperial Gift Shop in the Radisson Hotel in Fargo for fifteen years before retiring in 2002. As a boy Tom enjoyed helping his mother in the garden, caring for his younger siblings, and baking bread. He continued this by helping Louise in the kitchen baking buns and making lefsa. The first car he drove was a Ford Model T. Tom loved nature and being outdoors. He was a skilled carpenter and could fix most anything. He was quick with humor and loved to make people laugh. Tom loved the Lord and his family and he will be dearly missed by his family and friends. Tom is survived by his wife Louise, sons Arlen (Sheryl), Hazen, ND, Rodney, Dilworth, MN, Dean (Brenda), Maple Grove, MN, David (JoAnn), Fargo, ND; daughters Heidi (Bill) Findorff, Whitehall, MI, Julie (Marcus) Andersson, Meadow Lakes, AK; brothers Charles (Mary Jo), Neenah, WI, Roger (Kay), Goodhue, MN, Richard (Betty Scantlin), St. James, MO; sisters Linda Anderson, Fargo, ND and Vicki (Elliott) Haugen, Chesterfield, MO; as well as 14 grandchildren, one great grandchild, numerous nieces, nephews, and extended family. Tom is preceded in death by his parents, brother Eugene, and brother-in-law Richard Anderson.

The family of Thomas Kurtti created this Life Tributes page to make it easy to share your memories.

Send flowers to the Kurtti family.