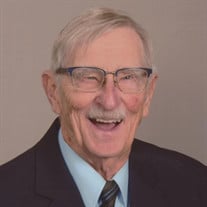 A funeral service for Tom will be streamed at 1pm, Friday, June 5, 2020 at the following link: https://vimeo.com/424210666 Tom's Video Tribute can be viewed here: https://www.tributeslides.com/tributes/show/DHH6954CF2CDRRDW Thomas Donald Hansen was born on March 24, 1937, in Rockford, Illinois, to parents George Donald Hansen and Naomi Williams Hansen. Thomas began his life’s journey. He was one of two children, along with his older sister, Carol. During his teen years, Tom was a member in good standing of the Boy Scouts of America, where he learned camping, swimming, and canoeing. He obtained many merit badges towards his goal of becoming an Eagle Scout. After graduating from high school in 1955, Tom enjoyed playing ice hockey in this stage of his life. Then came his college years, where he acquired many good friends. He studied for two years at Iowa Wesleyan University and one year at Rockford College before entering the business world. After a number of successful sales positions, including one with a Fortune 500 pharmaceutical firm, Tom became a regional sales manager for a steel building manufacturing company in Jamestown, North Dakota. This is when Tom became interested in airplanes and learning to fly. He soon obtained his private pilot’s license, and he purchased his first airplane. After a number of years flying throughout the Midwest and Canada, Tom and a close friend and fellow pilot crash-landed their airplane in a raging North Dakota blizzard. Soon after, Tom became a Born-Again Christian, proclaiming the Good News of Jesus. He shared his faith with his family and friends. At age 68, Tom had open-heart surgery. He was not expected to survive, but Got had other plans, and spared his life for the second time. The plan was to help the needy and hopeless, and to proclaim the Good News of the Gospels through the Trinity Broadcasting Network in Santa Anna, California, where Tom was a prayer partner in the mid-1990s. In 1963, Tom married Susan May Alexander in Rockford, Illinois. They had three sons: Brian, Jeff, and Eric. After 20 years, the marriage dissolved. Then, 31 years later at age 78, Tom married Joan Myers. The ceremony took place in Galchutt, North Dakota, and they lived in West Fargo, N.D. After retiring as a sub-contractor, Tom worked for the City of Fargo Park Board for 12 years. Fishing, flying, hunting, and spending time with his sons and grandchildren were the most rewarding parts of his life. Tom will forever be loved and deeply missed by his wife, Joan; his sons Brian, Jeff, and Eric; his daughters-in-law Jennifer and Tami; his grandchildren Samantha, Tanner, Nathan, Abigail, and Elizabeth, his sister, Carol; and his nieces and nephews. Tom was preceded in death by his parents and his first wife Susan.

The family of Thomas Donald Hansen created this Life Tributes page to make it easy to share your memories.

A funeral service for Tom will be streamed at 1pm, Friday, June...

Send flowers to the Hansen family.