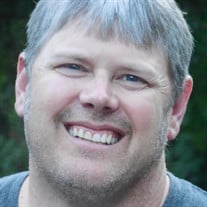 Thomas' Funeral Service will be streamed here: https://vimeo.com/445430665 Thomas Robert Edmunds was born April 23, 1971 and left us too soon, at only 49 years old, on July 31, 2020. Thomas, as he was called by his parents, Luther and Virginia Edmunds, grew up in LaMoure, North Dakota after they had returned from North Carolina where he was born. In LaMoure, his friends all called him Tom, Ed, or one of the Warcken Crew, as he spent so much time with their families. After graduating from LaMoure, Tom attended NDSU for a few years and made lifelong friends. Tom continued spend time with his buddies from LaMoure, even in the weeks prior to his unexpected death. After his time at NDSU, he started working at Fargo Glass and Paint, where he worked in the hollow metal department for approximately 20 years. Tom spent the past year at Central Door and Hardware Inc. working in sales, as he enjoyed the change of pace this brought but continued to focus on the hollow metal area he knew so well. Tom’s first son, Isaiah, was born October 30, 1999. Isaiah brought so much joy to his life, and Tom did all he could to attend sporting events, school programs, hunting adventures, and every important event he could while Isaiah resided with his mom. Tom started dating Jordana (Heller) in 2005. He fondly shared stories about Isaiah but waited a full year before introducing the two. Four years later, Tom and Jordana were engaged, and September 18, 2010 they wed in an outdoor service surrounded by friends and family. Just two weeks after the wedding, Milo and Toby joined the family. A year later they were officially adopted and legally considered their sons. They admired their dad and loved talking football, basketball, and hunting. Two more children were born in the years that followed. Ryker and Eva, who were often seen cuddling on the couch with their dad, often pointed out to Jordana that he was way better than her. All the kids loved spending time with their dad, whether it was on the couch, in the park, in the backyard, or on one of Tom’s favorite “family vacations with the extended family.” Through all of this, one would never have known that Tom’s heart often required frequent visits to the doctor and surgeries. He hardly complained, even though it caused him to feel awful. We are thankful for the last year, as Tom was able to stay out of the emergency room and hospital, and overall felt pretty well. Jordana and Tom were currently planning weekend getaways and home projects. These projects will continue, as everyone learns to adjust and remember the love Tom had for others. Tom leaves behind his wife Jordana, his children Isaiah (20), Milo (13), Toby (12), Ryker (7), and Eva (6), many aunts, uncles, cousins, in-laws, nieces, nephews, and so many friends that he thought of as family. Tom was preceded in death by his parents and many others he adored. The funeral service will take place at 11:00 a.m. on Friday August 7th at First Lutheran Church in Fargo. Visitation will be held one hour prior to the service. Everyone attending is encouraged to wear their favorite sports attire, but if some choose to wear Duke, there will be an obstructed view, as everyone who knew Tom knows UNC Tar Heels are the best! The service will also be streamed online for those not able to attend in person. Thomas' Video Tribute can be viewed and copies ordered here: https://www.tributeslides.com/tributes/show/QCN4YMNTMY4PPMTG

The family of Thomas Robert Edmunds created this Life Tributes page to make it easy to share your memories.

Send flowers to the Edmunds family.