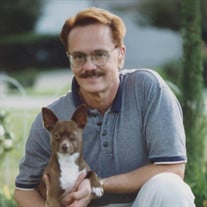 Terry Donald Garnas was born on June 14, 1947, in Watertown, South Dakota. He passed away in Orlando, Florida, January 11, 2020. Terry grew up in the Fargo/Moorhead area and graduated from Moorhead High. After high school, he pursued educational interests at MSUM, University of Montana, Kansas City Art Institute, Aveda Institute, and St. Catherine’s University. He enjoyed new places and lived in Missoula, Kansas City, Denver, Minneapolis, and Orlando. His professional credits include being a hairstylist, an occupational therapist, and, in retirement, an elder caregiver. He loved his pets unconditionally and was a gardener extraordinaire. Terry was preceded in death by his grandparents: Rose and Peter Garnas, Ida and Raz Reinholdt, and his parents, Matthew and Marian Garnas. He is survived by his sister, Vicki (Ron) Wiisanen, Fargo, North Dakota; a half-sister, Betty (Ken) Lien, Bismarck, North Dakota; a half-brother, Don (Ruth) Garnas, Maui, Hawaii. He is also survived by his nieces and nephews, Matt Wiisanen, Chattanooga, Tennessee; Mike Wiisanen, Chicago, Illinois; Amanda Kadrmas and Jeff Wiisanen, Fargo, North Dakota; Kristi Preszler, Bismarck, North Dakota; Leslie Lien, Grand Junction, Colorado; Deborah Thorpe, Perham, Minnesota; Dan Garnas, Page, North Dakota; Darcy Erickson, Colgate, North Dakota; and David Garnas, Aurora, Kansas. Without a doubt, Terry’s legacy will be the lessons his family learned from observing his life. We must accept all people for who they are, appreciating similarities and embracing differences. Judging others is not necessary, nor is it our responsibility. It is important to let our loved ones know how much we care about them...often. Treating animals kindly and spending time enjoying the outdoors make you a better person. May God bless the memory of Terry Garnas. A private burial service will be held at Riverside Cemetery in Fargo, ND.

Terry Donald Garnas was born on June 14, 1947, in Watertown, South Dakota. He passed away in Orlando, Florida, January 11, 2020. Terry grew up in the Fargo/Moorhead area and graduated from Moorhead High. After high school, he pursued... View Obituary & Service Information

The family of Terry Garnas created this Life Tributes page to make it easy to share your memories.

Send flowers to the Garnas family.