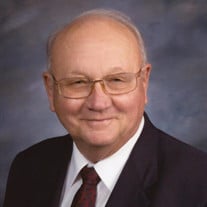 Terry's service can be viewed here: https://vimeo.com/event/1188014 A heart of gold stopped beating last Sunday at a time when the world needs more of that attribute. We are diminished by his passing. Many businesses or institutions feel obligated to post their “core values” or “mission statement” since that is the recent fad. Terry Bladholm lived his 88 years based upon that ideal because that was exactly who he was each day. A kind, thoughtful, generous, honest, selfless, caring, funny, devoted family man filled with integrity and life. Everyone who ever met him would agree. Terry was an exemplary person whom others wanted to be around because he was a genuinely nice guy. His family, faith, friends and inner character helped to create that persona. Grandparents who immigrated from Sweden and Norway to build a new life and achieved that through hard work and perseverance. Parents who continued that path forward by always being the best they could be and succeeded in so many ways. His sister, brother, aunts, uncles, cousins, nieces and nephews – all were so important to him and continued to be so. A beautiful, wonderful, loving wife who was his partner through good times and bad for 61 years. Donna was the best thing that ever happened to him and he loved her dearly. His children and grandsons, who were and are so grateful and honored to have been part of his life. Donna’s family was equally important to him because they were the source of who she was and he loved them. They also brought a closely knit family that was quite a bit bigger than he was used to. But he fit right in. Terry’s membership in the Shrine began in 1956. Being an active part of that organization brought him a great source of pride since they do so much to help children and the members are also men of character. His faith in God and support of the church were a continuous part of his life. Terry had a huge number of friends who were like brothers and sisters, daughters and sons to him. They loved and respected him for that. Terry was a successful businessman who was the 3rd generation of his family to work in the company his grandfather Axel had started in 1892. The precast concrete materials the company manufactured will benefit the area for 100 years and he was proud of that legacy. Terry was on the board of directors of the Village Family Services, Fargo National Bank, North Dakota AGC and was president of the Minnesota ARM & the North Dakota RMCP. He was a long time member of the El Zagal Oriental Band and Royal Order of Jesters. Terry Richard Bladholm was born at home on August 4, 1932 in Marshall, MN. He peacefully passed away in his sleep on November 1, 2020 in Fargo. Donna had spoken to the nurse a few hours earlier about his condition. The nurse asked her – do you have a daughter named Cindy? Donna said – yes we did, but she passed away a few years ago from cancer. The nurse replied that Terry had told her – you look like Cindy… are you Cindy? We truly and firmly believe that Cindy WAS there with him, comforted his confused mind and tired body, held his hand and helped him to cross over to the other side. Terry is survived by his wife Donna, son Steve, grandsons Obbie and Carter, sister Judy, brother in law Bill, son in law Kent and many cousins, nieces and nephews. He was preceded in death by his parents Albin (Obbie) and Edith, brother Tom, daughters Cindy and Julie Ann, many close family members including Donna’s parents, brother and sister in law. There were many close friends waiting for his arrival in heaven, so they probably had a big party in his honor when he walked through the gate. A funeral befitting this man will be held whenever circumstance allows it. The virus prevented us from being with him the last month of his life when he needed us the most. That is a heartbreaking reality for many families now. We will see him again in the fullness of time. A private service will be streamed on the funeral home website at 2pm, Monday, November 9, 2020. Burial will take place at a later date at the Marshall Cemetery, Marshall, MN.

Terry's service can be viewed here: https://vimeo.com/event/1188014 A heart of gold stopped beating last Sunday at a time when the world needs more of that attribute. We are diminished by his passing. Many businesses or institutions feel obligated... View Obituary & Service Information

The family of Terry Richard Bladholm created this Life Tributes page to make it easy to share your memories.

Send flowers to the Bladholm family.