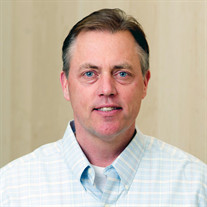 Prayer Service can be viewed here: https://vimeo.com/453144903 Memorial Service can be viewed here: https://vimeo.com/453310000 Steve Connelly, 54, of Fargo, ND was chosen by God to come home on Tuesday, August 18, 2020. Steven Lawrence Connelly entered this world on August 15, 1966 in Moorhead, MN, born to John and Karen (Tompt) Connelly. He grew up on a farm in Sabin, MN, and attended Moorhead public schools and graduated from Moorhead High School. He received his Bachelor of Arts from Concordia College in Moorhead and his Master of Science from South Dakota State University in Brookings. In his sophomore year of college, he enlisted in the Army National Guard in which he served for 21 years, retiring with the 188th Army Band in 2008. On October 16, 1993 he married Rochelle “Shelly” Tarbell in Fargo, ND. This is when Steve’s whole world was formed. He was never more proud than when he became a father in 1997 to their first son, John “Jack” James. In 1999, arrived their second son, Grant Steven. Steve was always proud to share his son’s achievements and goals with anyone who would listen. Steve was an assistant football coach at MSUM and was head football coach at Moorhead High School. After coaching and teaching, he was honored to begin working at RDO Equipment where he has been for the last 17 years. Steve also served on the board of directors for the Village Family Service Center. He enjoyed golfing, going on walks with his springer spaniel, Lily, every morning before work, and fishing on Loon Lake. The lake was his haven and retreat. He loved to travel with his family, especially with Shelly, most recently last fall spending a trip of lifetime with Mark and Traci Kreps in Australia with dear friends in the Great Barrier Reef. Steve always made time to take individual trips with his boys because Steve will be remembered as one who would always say “Take the time to spend the time”. He is survived by his wife, Shelly; sons, Jack and Grant Connelly; mother, Karen (Sam) Adams; siblings, Chris Connelly, Alyssa (Scott) Flaten, Aarie (Ben) Evenson; mother-in-law, Pat Tarbell; brothers-in-law, Tim (Trish) Tarbell and Kelly (Lisa) Tarbell; nieces, Samira, Elliana, Brynn; and nephews, Judah and Cade. And many other special relatives. He was preceded in death by his father, John; father-in-law, Jim Tarbell. A private memorial service, with full military honors, will be held at 2pm on Wednesday, August 26, 2020 and will be livestreamed on the Hanson-Runsvold website. A visitation will be held for Steve and his dear friend, Mark Kreps, from 3:30-7pm, Tuesday, August 25, 2020 at Bluestem Amphitheater in Moorhead, MN. A prayer service will be held at 7:00pm. Steve loved trees and making the world a more beautiful place, so in lieu of flowers the family would ask that you plant a tree in Steve’s memory. Steve's Tribute Video can be viewed and copies ordered here: https://www.tributeslides.com/tributes/show/3NJGYK9WS64ZTR9S

The family of Steven Lawrence Connelly created this Life Tributes page to make it easy to share your memories.

Send flowers to the Connelly family.