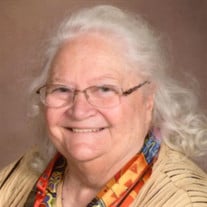 Sonja Leonhardt, a longtime resident of Devils Lake, North Dakota died peacefully on Thursday evening May 16, in Fargo, surrounded by her loving family. Sonja was 82 years old. Sonja Martha Christina Vorbeck was born on March 12, 1937 to Karl and Martha (Kraus) Vorbeck in New York City, New York, the oldest of two daughters. Sonja grew up and attended elementary and high school in Manhattan, New York. After graduating from high school in 1954 she worked at a bank on Wall Street. In September 1957 she began her education studies at Concordia College, Bronxville, New York, where she met the love of her life, and future husband Roger Leonhardt of Providence, Rhode Island. Their first date was on Valentine’s Day 1958, it was the most fitting first date for the lifelong love they shared. After graduating from Concordia in Bronxville she attended Concordia Teachers College in River Forest, Illinois; whose name was later changed to Concordia University Chicago, where her granddaughter Martha would also attend. On June 22, 1963 Sonja married Roger at Immanuel Lutheran Church in New York City, where they began their life together selflessly serving others. They moved to Winnipeg Manitoba Canada for Roger’s vicarage, working with a congregation of people who were deaf. It was here that they both found a passion for deaf ministry. During their vicarage year their son Tad was born. After Roger’s Ordination in 1965, their daughter Lorinda was born and the family of four moved from Rhode Island to Devils Lake North Dakota. Sonja began teaching at the North Dakota School for the Deaf (NDSD) where she would teach elementary students and touch the lives of hundreds of children with her endless joy, creativity, and always seeing the good in people. In 1976 Sonja became the full time Art teacher at NDSD which she would teach until her retirement in 2001. Sonja loved spending time with her family traveling to the East Coast to visit family and around North Dakota and Minnesota in their motorhome. She especially loved to spend any time she could with her grandchildren and great grandchildren. Sonja and Roger’s love for each other was unwavering. People often spoke of “RogerSonja”; as one word, always together and caring for each other. Sonja was the perfect picture of humility and forgiveness; She was more willing than anyone to give second and third chances. Her faith was at the center of everything she was, and she loved to share the hope that Jesus brings to everyone. Just four months after Roger’s death, Sonja joined him in their eternal home. Well done good and faithful servants. Sonja is survived by her son and daughter-in-law, Tad and Kris Leonhardt of Sioux Falls, SD, and their six children and families; Anthony (Emmaleigh) Leonhardt, Canton, SD; Benjamin (Charlotte) Leonhardt and their children Charis & Gideon, Lincolnton, NC; Kassia Leonhardt & daughter Bailee, Sioux Falls, SD; and Tabetha, Zane and Eli Leonhardt, Sioux Falls, SD. Sonja is also survived by her daughter and son-in-law, Mitch and Lorinda Semanko, Fargo, ND, and their five children and families; Zachary Idland and daughter, McKynlea Kitsch, Fargo, ND; Alexandra (Kellen) Bubach and their daughter Masen, Ankeny, Iowa; Cassidy Semanko (Renier Salas) & daughter Blakely, Santa Ana, CA; Martha Semanko, Loveland, CO; and Sophie Semanko, Fargo, ND. She is also survived by her sister, Marianne Vorbeck, Colts Neck, NJ; sister-in-law, Cindy Leonhardt, Vero Beach, Florida, her niece and nephews and their families, and very special cousins, Armin (Karen) Kraus Valley Center, Kansas and Fred (Jean) Doneit, Poughkeepsie, NY. Sonja was preceded in death by her husband, Roger; her parents, Karl and Martha Vorbeck; her infant brother, Walter; her mother and father-in-law, Oscar and Louise Leonhardt; her brother-in-law, Oscar Leonhardt; grandchildren, Karl Leonhardt and Stephanie Leonhardt, and great grandson, Luca Brooks Bubach. The family of Sonja Leonhardt would like to thank the nurses, CNA’s and the entire staff at Bethany Homes on University for their loving care of both Roger and Sonja. There will be a luncheon following the burial at St. Peters Lutheran Church in Devils Lake.

The family of Sonja Martha Christina Leonhardt created this Life Tributes page to make it easy to share your memories.

Send flowers to the Leonhardt family.