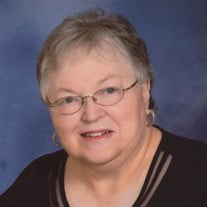 After a life well lived, Sondra “Sandi” Marie (Waller) Paustian, 78, passed away on Wednesday October 30, 2019, at her home in Fargo. Sandi was born in Crookston, MN on July 20, 1941 to Howard and Gladys (Horge) Waller. Sandi was baptized and confirmed at Trinity Lutheran Church in Crookston. Sandi grew up in Crookston with her sister Shirley and attended Crookston Central High School. She could usually be found at the ice rink figure skating or playing hockey. On March 2, 1968, Sandi married Chris Paustian in Crookston, MN. They made their home in Grand Forks, ND while Chris attended the University of North Dakota and Sandi worked at JC Penney. They welcome their first child, Christian, in 1970. They relocated to Sioux Falls, SD and welcomed their second child, Timothy, in 1973. In 1975, they moved to Grafton, ND, where they lived until 1985. In 1985, they moved to Mitchell, SD, where they lived until 2016, when they moved to Fargo, ND. Sandi committed her life to raising her two boys, including teaching them how to throw a baseball and football. She took great pride in her work in Mitchell at the County Fair Food Store nursery. Sandi was a master seamstress and excelled at counted cross stich, completing numerous projects every year. She was a member of the Embroiderers’ Guild of America and First Lutheran Church in Fargo. Sandi had a very strong faith which was demonstrated throughout her struggle with ovarian cancer, which she beat. Sandi was blessed to have another girl in the family when Tim married Alyssa (Larson) Paustian in 1998. Sandi’s love for Alyssa was evident from the moment they met. Two grandsons, Zachary and Andrew, followed in 1999 and 2003. Sandi’s pride and joy were her grandsons. She lit up whenever they were around. Even when her health declined, you could not keep her away from their activities, especially hockey. She enjoyed hearing about their other activities, including football and track, and their school work. One of her favorite activities with them was shaking dice, and she would never let them win Sandi is survived by her husband of 51 years, Chris Paustian, Fargo, ND; sons, Christian Paustian, Surprise, AZ, and Tim Paustian, Fargo, ND, her two grandsons, and many nieces and nephews. Sandi was preceded in death by her parents Howard and Gladys Waller and her beloved dog Bubba. Sandi’s family is extremely grateful for the staff at Hospice of the Red River Valley for their care, support, and kindness over the past year. Memorials are preferred to be given to Hospice of the Red River Valley.

The family of Sondra Paustian created this Life Tributes page to make it easy to share your memories.

Send flowers to the Paustian family.