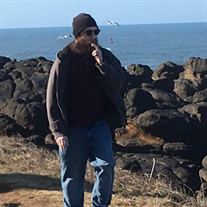 Skylur's funeral service can be viewed here. https://vimeo.com/620112762 Skylurs tribute video can be viewed here: https://www.tributeslides.com/tributes/show/X47RLRCY4YHK83WR Skylur Herman Koch came into this world on August 10, 1994. He was born here in Fargo at MeritCare, ironically with a broken arm. Sadly, that is one of the things he took with him when he left us. Skylur was involved in a collision that ended his life on September 26, 2021. He and two crew members were on their way to Gwinner, ND. They worked for the North Dakota Grain Inspection, and their schedule was dependent on that of the trains. The accident happened shortly after they left shop. Skylur is a beloved son, brother, cousin, nephew, and dearly loyal friend. Skylur enjoyed online gaming, cards, and dice. His favorite hobby was finding which buttons to push to keep you jumping, as he is known to be a jokester, prankster, and free spirit. From a young age, he had a great love and respect for all living things. He will be terribly missed by Lionel, Sammie, Barky Blue, and Yeti. In his short life worth living, Skylur endured his fair share of trauma and loss. He never let it dampen his kind and giving spirit with which he unwaveringly supported his family and friends. If he made a mistake, he made up for it tenfold. If he was really trying to make a point, he would sing to you. Skylur graduated from Woodrow Wilson High School in 2013. He also attended the Minnesota State and Community Technical College in Moorhead, where he received a diploma in Electrical Technology and earned a place on the President's List of Academic Honors. He worked at various jobs involved in the food industry in the FM area. He also worked as an electrical apprentice. He was most recently employed with NDGI, North Dakota Grain Inspection. By far, his favorite stomping ground will forever be Deek's Pizza in West Fargo. Skylur is survived by his parents Randy and Jean (Dumas) Koch and his sister Sydny and brother-in-law James Brakke. He leaves behind numerous Aunts, Uncles, and cousins. Skylur's family would like to thank his friends for the outpour of love and testimonials relayed in detailing the impact of Skylur's friendship, love, and loyalty to and for them. In lieu of flowers, Skylur would ask that you tip your delivery drivers and servers, do something nice for your friends, and if you don't feel you have any of those, do something kind for a stranger; you never know where that might lead. Remember to be humble, forgiving, and thankful. His presence is a void that we will need to find a way to get through.

The family of Skylur Herman Koch created this Life Tributes page to make it easy to share your memories.

Send flowers to the Koch family.