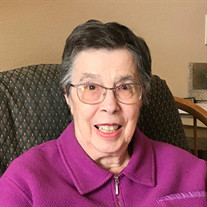 Shirley A. (Roscoe) Williams, 88, died at Eventide Sheyenne Crossings, West Fargo, ND on June 23, 2019. She was born in Jamestown, ND on February 9, 1931, to John and Dorothy Roscoe. She married Vernon Williams on January 12, 1952, in Moorhead, MN, and they celebrated 65 years of marriage before Vernon’s death in 2017. Early in her career, Shirley had teaching positions in Wimbledon, ND, Dickey, ND, and Halliday, ND. In 1957, she and Vernon moved to Fargo, ND, where she later taught in the Fargo Public School District for 24 years (most of that time at McKinley Elementary School). In the 1970s, they moved to a farmstead near Harwood, ND, and they took great pleasure in their life in the country before returning to Fargo in 1998. Shirley enjoyed doing crossword puzzles, reading, playing cards, and canning and preserving produce from her garden. She and Vernon took many vacations and trips throughout the western part of the United States, and although she didn’t ride, she supported Vernon’s love of horses by attending many trail rides and other horse-related activities. In her retirement, Shirley was active in the Harwood Senior Citizens and volunteered at Sanford Health and the Sons of Norway in Fargo. Shirley is survived by her sons, Duane, Longview, WA, and John (Sharon), Moorhead, MN; daughter, Joni Bonham (Mark), Rocklin, CA; five grandchildren, Mary-Alice Williams, Caitlin Williams, Sean Williams, Kate Bonham, and Eric Bonham; and a number of nephews and nieces. She was preceded in death by her parents, John and Dorothy Roscoe; her husband, Vernon; and her brothers, Robert Roscoe and Neil Roscoe.

The family of Shirley Ann Williams created this Life Tributes page to make it easy to share your memories.

Send flowers to the Williams family.