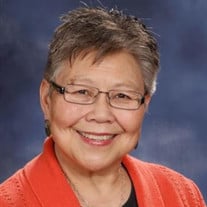 Prayer Service will be streamed here at 7pm, July 8, 2020: https://vimeo.com/432636961 Funeral Service will be streamed here at 2pm, July 9, 2020: https://vimeo.com/436891124 Visitation will be Wednesday, July 8, from 5-7 pm with a prayer service and time for sharing following at 7 pm. The funeral service will be at 2 pm, Thursday, July 9. Both services will take place at First Lutheran Church (Fargo). Shirley was born in Bozeman, Montana, on Nov. 12, 1951, the daughter of Dorothy and Gabriel Wada. She grew up in Three Forks, Montana, where she graduated from Three Forks High School in 1970. She met Thomas Daniel Tietz while attending Montana State University. Shirley married Tom on September 4, 1971, in Three Forks, Montana. Tom and Shirley then began their journey together in Bozeman, Montana. They moved to Great Falls, Montana (1973), where they welcomed their first child, Angela. In 1975, the family moved to Malta, Montana, where their son Chris was born. Shirley and Tom moved to Sidney, Montana, in 1978, where they welcomed two more children, Deanna and Jessica. In 1985, they moved to Williston, North Dakota. Shortly after all their children graduated, Shirley and Tom moved to Huron, South Dakota (2006). In 2011, they had the opportunity to move closer to family, so they made the move to Fargo, North Dakota. While living throughout Montana, Shirley was involved in her community and churches. In Williston, Shirley took on a more active roll in both her career and as a woman of faith. Her children always came first; therefore, her career paths needed to work around the schedules of her children. Some of her work included being a florist, seamstress, managing a gift shop, running an arcade, and working in Human Resources. Shirley had a fun connection when she worked at the Health Unit, which was formerly the local hospital. She worked on the same floor Tom was born on over 40 years earlier. Shirley was a volunteer at First Lutheran Church (Williston) on the education board as the education superintendent and department leader. Once Shirley moved to Huron, South Dakota, she worked as the Director of Youth and Family Ministry at Our Saviors Lutheran Church. She was the type of leader that loved to jump on the roller coasters and attend camp with her youth groups. Even though they enjoyed Huron, moving to Fargo brought them closer to family. Shirley began her service at First Lutheran Church (FLC) as the Small Group and Youth Coordinator. Most recently, she focused on member relations and coordinating volunteers. Besides marrying her husband (Tom), Shirley’s greatest gifts were her four children, nine grandchildren, and one great-grandchild. She truly was their biggest cheerleader. Shirley was more than just a friend’s mom or grandma; for some, she was a “mom,” she was also known as the “neighborhood grandma.” When you walked into the Tietz home, you were welcomed and loved, even if you were just stopping by for sugar-filled goodies. She spent time sewing everything from prom dresses to scarves for an entire swim team, and you can’t forget the unique birthday cakes she made for family and friends. Shirley mentored several teens through not only their journey to confirmation but also in faith. As the volunteer coordinator for FLC, everyone joked that they couldn’t say no to Shirley, but they enjoyed the opportunities they were provided. Many at FLC won’t look at a ‘yellow shirt’ the same. Shirley is survived by her husband Tom and children, Angela (Ryan) Lindley of Olympia, WA and their children Collyn, Alexa, and Akyra; Chris (Vecta) Tietz of Mandan, ND, and their children Trevin and his son Sylas, and Treys; Deanna (Matt) Monson of Fargo, ND, and their children Ayden, Damen, Kamden, Braxton; and Jessica Tietz of Thornton, CO; niece, Michele (Craig) Hedquist of Casper, WY and their children; Samson, Aryn, and Paul; nephew, Jeff Wada of Phoenix, AZ; and niece Kimara (Kayn) Bernard. Shirley was preceded in death by her parents Gabriel and Dorothy Wada, brother Gabriel Jr. Wada, and her great-nephew Braxton Hedquist. Shirley always loved flowers, but she also dedicated her life to helping others. She would love a memorial donation to the First in Mission Fund at First Lutheran Church. Shirley's Tribute Video can be viewed here: https://www.tributeslides.com/tributes/show/YZ79WHKH9H8NSF95

The family of Shirley Setsuko Tietz created this Life Tributes page to make it easy to share your memories.

Send flowers to the Tietz family.