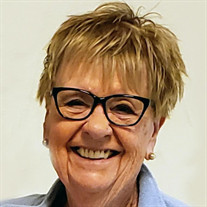 Shirley's tribute video can be viewed here: https://www.tributeslides.com/tributes/show/7CCMLNRJR8G6WR94 Shirley's funeral service can be viewed here: https://vimeo.com/622848353 It happened in 1937, at the end of the Great Depression. The world lost Amelia Earhart that year but, on March 11, gained Shirley Roe. It was a year when new products were being launched, like Kraft Mac & Cheese, Spam, and Kix cereal. Throughout her life, Shirley could tell you where they were all on sale. In recent years, she'd tell you by email, ALL IN CAPS. Shirley passed peacefully on Tuesday, September 28, 2021. Her family thanks Ethos Home Care & Hospice, who brought her home in comfort and dignity. Shirley was born to Gilman and Florence Roe, of Hendrum, Minnesota, where she graduated high school in 1955. She was born, raised, and remained, a small town girl; and there's nothing wrong with that. Shirley was a strong Lutheran, who loved worship, and to belt out a good, loud hymn. Jesus was and is her close friend. A Highway 200 romance led, ultimately, to her marriage to Edwin Sorenson, of Ada. Other than a few years in Colorado, the couple lived life in Fargo, where they raised two children, Paul and Sara. Shirley was a cheerful worker. For twelve years she managed Moose Brothers Pizza. For another fifteen, she enticed you with yummies as a demo lady at Hornbachers. And, most recently, for fifteen more, she kept your room clean and tidy as a housekeeper for Sanford Health. Along the way, she enjoyed being with you, sharing stories, smiles and, of course, news of sweet prices. As years unfolded, Shirley took great pride in her seven grandchildren, all good people, each of whom, at some time, read the Book of Luke, Chapter 2, to her on Christmas Eve. And she loved her two great-grandchildren, Maxwell Sorenson and Amelia Schmoll, both beautiful and full of promise. Shirley was preceded in death by her parents, Florence and Gilman Roe; her husband, Edwin Sorenson, and a grandson, Seth Sorenson. She is survived by her children, Paul (Julie) Sorenson and Sara (Mike) Gjesdahl; her grandchildren, Eric (Hillary) Sorenson, Ethan (Sandra) Sorenson, Haley (Brady) Schmoll, Emma (Mitchell) Gullickson, Noah Gjesdahl, Kelsey (fiancé Brandon Riddle) Sorenson and Sophie Gjesdahl; her two great-grandchildren, Maxwell Sorenson and Amelia Schmoll, and her brother, Thomas (Marilyn) Roe. Memorials to Roger Maris Cancer Center are preferred.

The family of Shirley Ann Sorenson created this Life Tributes page to make it easy to share your memories.

Send flowers to the Sorenson family.