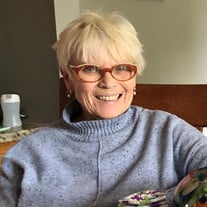 View Shirley's Tribute Video Here: https://www.tributeslides.com/tributes/show/47NJNPKSPPPCFBBX Shirley Mae Liebenow - McCluhan, born Shirley Mae Nellermoe, was born on April 4, 1944, to Melvin and Esther (Heglie) Nellermoe in Fargo, ND, and died December 21, 2021, in Edgewood Vista Retirement Home in Fargo, ND. She was baptized in the Lutheran faith on May 28, 1944, and confirmed on May 18, 1958, in Christine, ND. During her childhood, she lived on the Nellermoe family farm near Christine, ND. She attended Oak Grove High School and graduated in 1961. She then graduated from Concordia College, Moorhead MN in 1966 with a Bachelor's Degree in Medical Technology (ASCP) and went on to pursue additional graduate studies at the University of North Dakota in Grand Forks. During her college years, she met and married Lowell Liebenow of Chaffee ND in August of 1964. They had three children, Todd, Kirsten, and Jennifer. After 20 years of marriage, they divorced. She later met and married John McCluhan. They moved to Minneapolis, MN, and later divorced. Shirley stayed in Minneapolis and worked in the hematology field at both medical laboratories and medical device companies. She finally retired as the Hematology Technical Consultant and Supervisor of Satellite Laboratories from the Allina Health Systems in 2014. After retiring, Shirley returned to live in Fargo, ND. She found retirement to be less than challenging, so she pursued several part-time jobs. The one she loved the most was Home Depot. She loved taking care of all of the plants and talking to people about their yard and garden projects. She always knew just how to arrange the various plants to get the best look for the space. She finally left Home Depot in 2019. She finally moved to Edgewood Vista Retirement Home and made many friends, shared her love of gardening, and helped out wherever she could. Throughout her life, Shirley would always look out for everyone else. She would care for her neighbors and friends when they couldn't care for themselves. She continued to demonstrate this concern by stepping in to help whenever she could, even as a resident. Her love of gardening was among her greatest joys and means of finding peace. She spent many hours creating works of art in her yard (and other people's yards, too!) She had a talent for knowing just what plants to put where and how to revive those that were struggling. Her talents did not go unnoticed. Her boulevard landscaping in Minneapolis won The Blooming Boulevards Garden of Merit, in 2001. Many regarded her as a 'Master Gardener.' Gardening was only one of many talents and interests Shirley had. She quickly mastered any type of craft or art in which she had an interest. From floral arrangements to beadwork, from rosemaling to quilting, from knitting to crocheting, from needlework to woodwork and everything in between, her hands were never idle. She also loved cooking, especially around the holidays. The kitchen was always full of traditional Scandinavian goodies. This passion originated in her mother Esther's kitchen. Many days were spent in preparation for the family getting together on the holidays. Music was a part of Shirley's life from a young age. She participated in a variety of choirs both at church and at school. Later she joined the musical group "Sweet Adelines" in Fargo, ND. Some of her closest friendships were made from her years of being a part of this fun-loving musical group. Sweet Adelines also provided her with a means to explore the world. Shirley traveled internationally with Sweet Adelines for competition. Later in life, she renewed her interest in travel, taking several trips with coworkers and friends. Shirley is survived by her brother Ron (Afton) Nellermoe of Moorhead, MN, her son Todd (Mary) Liebenow, Fargo, ND, her daughters, Kirsten (JJ) Plude, Maple Grove, MN, and Jennifer (Tony) Wilwerding, Omaha, NE, and her grandchildren, Jones Maxwell, Ryan Liebenow, Olivia Plude, Violet Wilwerding, and Tyrian Wilwerding. Shirley was preceded in death by her parents, Melvin Nellermoe, Esther (Heglie) Nellermoe, a sister, Merrilyn Joyce (died in infancy), a brother, Royce Rolland (died in infancy), a brother Dennis, a sister Millicent.

The family of Shirley McCluhan created this Life Tributes page to make it easy to share your memories.

Send flowers to the McCluhan family.