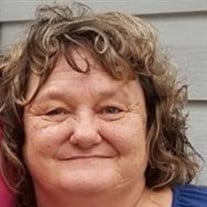 Sherry Stuber (54), Fargo, ND, passed away on January 16, 2021, at Sanford Health in Fargo. Sherry was born in Fargo, ND, on May 18, 1966, to Walter and Lois (Helm) Stuber in Fargo, ND. She grew up in Mapleton, ND, and attended school in West Fargo. She enjoyed participating in Drama and Speech. She was also a wonderful artist. She went on to attend and completed her degree at Interstate Business College. Sherry worked various roles in her life and always took pride in her roles. She had a career of caring for and assisting others, which included being a secretary, housekeeper, manager, and homemaker. Sherry had a love for horror movies, 80’s music, including Michael Jackson and Bon Jovi, and peaceful time at the lake. Sherry was a loving mother, daughter, aunt, grandmother, and friend. She was always making friends wherever she was. She was loved and will be missed by many. Sherry is survived by her five children: Trisha (Al) Anderson of Leonard, ND, Chris Beedy of Fargo, ND, Chesney (Hannah) Boor of Fargo, ND, River Hawley of Fargo, ND, and Brooke Hawley of West Fargo, ND.; Her sister: Sheila Stuber; Her two grandchildren: Emmett Luehmann and Aubree Anderson; Her nieces and nephews: Missy (DJ) Sether, Jenny (Kevin) Slyt, Josh Cook, Patrick Stuber, and Tiffany Stuber. Sherry was preceded in death by her parents and brother Shawn Stuber.

The family of Sherry Lynn Stuber created this Life Tributes page to make it easy to share your memories.

Send flowers to the Stuber family.