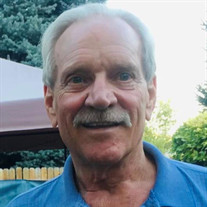 Scott Douglas Reid, 70, of Boise, Idaho, passed away Sunday, August 29, 2021, in St. Luke’s Hospital in Boise after losing his battle fighting Covid. Scott was born October 25, 1950, in Omaha, Nebraska, to Robert and Bette (Bartos) Reid. He attended school in Omaha until the family moved to Fargo, ND, in 1965, where he attended Fargo North High School (Class of 68’) and lettered in Varsity Swimming. While attending Fargo North, Scott met Deborah Restemayer and they married in the fall of 1970. They had three children together. Scott loved fishing with his father and his family on their lake home in Audubon, MN and their “guys” trips to South Dakota where they’d go fly fishing for trout. Scott loved to travel and take pictures. Scott worked as Parts Manager for Peterbilt Trucking of Fargo and transferred to their Boise, Idaho location in the early ’90s. He and Kar Miller, his wife at that time, built a home there and made many great neighbors and friends. Scott was very handy, creative, and eager to lend a hand when someone needed something. He loved using his impressive carpentry skills to build things, such as dollhouses and rocking horses for his grandchildren. He was incredibly generous, thoughtful, and hilarious, if there was a punch line, he’d beat you to it. He has made and kept so many wonderful lifetime friends. Scott loved riding motorcycle, swimming, and staying active. He was a terrific host with his great sense of humor and love of cooking and sharing delicious meals. He loved thrifting and going to the auctions. He made a life for himself, finding, gifting, and/or selling unique items. He had an eye for cool and interesting things and a skill to fix just about anything. Scott is survived by his three children, Sean (Darla Helgeson) Reid, Jessica Reid, Matthew (Karen ) Reid; his grandchildren, Rylen, Marissa, Lily, Alli, Aria, Hailey, Kaleb, Garrett, Drake, and Cara, his sister Diane Carlson, and his brother Rodney (Jane) Reid. Scott was preceded in death by his parents Robert and Bette Reid, and his grandson Carson Reid.

The family of Scott D. Reid created this Life Tributes page to make it easy to share your memories.

Send flowers to the Reid family.