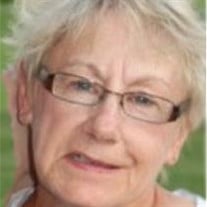 Sandy McNair Hertel, 74, Fargo, joined her heavenly family and friends on Monday, October 21, 2019, lovingly surrounded by her family at the Roger Maris Cancer Center. Sandy was blessed by amazing care from the Palliative and Hospice care teams. Sandra Anne Hertel was born to John and Mary (McCannel) Gunkelman on July 23, 1945, in Vineland, New Jersey, where her father was stationed in the Air Force. The family moved back to Fargo, her parent’s hometown, after the war ended. Sandy grew up in Fargo graduating with the Class of ’63 from Fargo Central High School. She attended St. Olaf College for 1 year before transferring and receiving her teaching degree from Moorhead State College. She also later completed her master’s in education at Mayville State University. Sandy married Michael McNair in 1968. Together they had 2 wonderful daughters, Jessica and Chelsea. They were later divorced. Sandy then spent many years nurturing her daughters and their numerous friends, many who affectionately thought of Sandy as their “second mom”. In 2004 after 6 years of dating, Sandy married her best friend and soulmate, Dale Hertel. Following her marriage to Dale, Sandy cherished the addition of Dale’s 3 children, Angie, Jeff, and Jason into their life. Sandy (Mrs. McNair) impacted the lives of hundreds of young people as she taught for close to 30 years at several elementary schools in the Fargo area. Her special gift was instilling the love of reading in her young learners. Many of her students have stayed in touch through the years and have openly shared the positive influence that Sandy has had on their lives. What a tribute! Sandy had two priorities outside of the classroom – her family and her friends. Her 11 grandchildren brought tremendous joy to Sandy. She lived for encouraging them and watching them participate in all their activities. Her devotion to her friends – many from childhood, but others added later in life – was inspirational. “My friends have made the story of my life” (One of Sandy’s favorite quotes). No birthday, no illness, no personal loss, was overlooked by Sandy as she tended to each friendship with her time and care. Sandy will be dearly missed by her devoted husband, Dale, daughters, Jessica (Jason) Just, Lakeville, MN, and Chelsea McNair, Fargo; Dale’s children – Angie (Jason) Caron, Bemidji, MN; Jeff (Heather) Hertel, Roseville, MN, and Jason Hertel, Minneapolis, MN; her beloved grandchildren – Sam & Max Just, Austin & Emme Schmidt, Lucas, Jack, Logan, Lilly, Grace, Sawyer, Olivia Caron; and her faithful dog Bodey. Sandy is also survived by her four siblings - Jo (Don) Kilander, John (Judy) Gunkelman, Mary Gunkelman – all of Fargo, and Tracy (Jerry) Samson, Maple Grove, MN, and many nieces and nephews. Sandy was preceded in death by her parents, grandparents, and dear friends Chris Rogers and Charlotte Berkey Berglund. A Celebration of Life service will be held on Monday, October 28th, at 10:30am at Olivet Lutheran Church with visitation starting at 9:30am. In lieu of flowers, Sandy requested your memorials go to The Fargo Public Schools Development Foundation or the American Cancer Society.

The family of Sandy Hertel created this Life Tributes page to make it easy to share your memories.

Send flowers to the Hertel family.