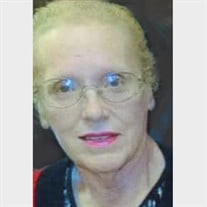 Sandy Anderson, 71, of Fargo, ND passed away on Monday, August 5, 2019 at Rosewood on Broadway, Fargo, ND. Sandra Jean (Westphal) Anderson was born May 9, 1948 in Milwaukee, WI to Harold and Olive (Joan) Westphal. She grew up in Greenfield, WI and graduated from Whitnall High School. She worked as a waitress at The Hitching Post and this is where she met her husband, Dennis Anderson, over a bowl of oyster stew and a promise of a Washington Apple. She never got the apple but she did get his heart. They were married on May 17, 1969 in Fargo, ND. Sandy became a homemaker and co-owner of Anderson Trucking and Towing. She and Dennis raised two children, Andy and Katie. Sandy became Dennis' co-pilot and together they ran many miles in the truck. She and Dennis were always on the go, whether it was work or play. Sandy loved the many road trips they went on, particularly driving all the way down the Baja Peninsula in Mexico. She was also an avid reader and never went anywhere without a book. She was a devoted wife, mother and grandmother. Her grandchildren stole her heart and she was always spoiling them with treats and toys. Sandy and Dennis were married 45 years at the time of his passing and we know they are happily reunited. Sandy is survived by her son, Andy (Jennifer) Anderson, Fargo, ND; daughter, Katie (Derek) Tuel, Wolverton, MN; 10 grandchildren, Chelsea, Nathan, Brody, Mya, and Jax Anderson; and Felix, Sage, Kash, Jude and Ollie Tuel; brother, Chris Westphal; sisters, Sue (Ron) Blazek and Carol Zabkowicz. She was preceded in death by her husband, Dennis Anderson; her parents; brother, Fredrick; brother in law, Stanley Zabkowicz and grandson, Lars Tuel.

Sandy Anderson, 71, of Fargo, ND passed away on Monday, August 5, 2019 at Rosewood on Broadway, Fargo, ND. Sandra Jean (Westphal) Anderson was born May 9, 1948 in Milwaukee, WI to Harold and Olive (Joan) Westphal. She grew up in Greenfield,... View Obituary & Service Information

The family of Sandra Jean Anderson created this Life Tributes page to make it easy to share your memories.

Sandy Anderson, 71, of Fargo, ND passed away on Monday, August...