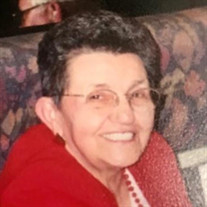 Ruth's Funeral Service can be viewed here: https://vimeo.com/594683123 Ruth's tribute video can be viewed here https://www.tributeslides.com/tributes/show/GK8JWH3FZD35JW3 Our Mother, Ruth Diede, was born on June 21, 1928, to Henry and Martha Diede. The Lord took her to Heaven on August 25, 2021. She was 93 years old. Ruth was one of 12 children; they were raised on a farm near Eureka, South Dakota. Her main job on the farm was babysitting younger siblings, cooking, cleaning, and other outside chores. Work was never-ending, seven days a week. She later taught country school, a one-room house with a wood stove for heating. She would have to fight through the snow very early and stock up the stove with wood to heat the house before children arrived. Ruth married Milbert Fischer on April 18, 1948. They had three children Jerry, Judy, and Jeanie. When Jerry was 5, they moved to Fargo and found work right away. Ruth had the gift of many talents, which took her on a path of many types of jobs. She just absolutely knew what it meant to work hard and give it her all in everything she did. She sold Stanley Home Products for many years and was a top salesperson during those years. Years later, she worked at NDSU until she was injured and was put on disability. She was a magnet with people just because of her amazing, outgoing spirit. A lady once told her, "If your laugh ever has babies, I want one." Ruth had many trials in her life, but she always prayed and focused on what was right in front of her and pushed forward. Ruth married Alfred Tollefson on July 16, 1994, in Fargo. They were so very active in their social life and church; we kinda had to make an appointment! Not at all! Our Mother always had time for her children and especially as we went through our own individual trials. Ruth was a pillar of love for her three children, no other way to describe her. Practically everyone we run into constantly reminds us of all the Sunday dinners at our home. I'm sure at different times, everyone at some point in the church had been invited to our home! Ruth would have very fancy coffee parties for the neighborhood ladies. Using coffee cup saucers with doilies, freshly ironed tablecloth and napkins, ribbon sandwiches, and the most amazing baked goods! As daughters, we would have to iron pillowcases, dish towels, our father's handkerchiefs, tablecloths etc.. Everything Mother made was with whipping cream, butter, and love for her family. She would even bring some to her doctor appointments and her children's workplaces for sharing. Making her awesome and amazing. German dishes are what we can not ever duplicate to her standards. Nothing will ever taste the same; she was born a cook. Our brother Jerry said … "We have to try to explain our Mothers great baking and cooking." This woman, our Mother, is someone we will always admire and look up to for her talents and strengths. As Ruth aged and was unable to continue her active lifestyle, she was eventually moved to Kind-er Care in West Fargo. This facility was a blessing from God, an answer to our prayers for quality loving care. Ruth was taken in as not just a resident but an addition to their family. They all called her Grandma! She was included in everything she was able to participate in. Her hearing had been a huge issue in her quality of life, and they all lovingly helped her with this disability. During Covid, they would send us videos so we could still be a part of her life. Ruth is survived by three children. Son Jerry Fischer, Fargo. Daughters Judy (Larry) Ehnert, West Fargo, Jeanie (Bill) Murrey Fargo. 7 Grandchildren Corey and Dawn Fischer, Cody (Michelle) and Levi Glaser, Tanner (Jenn), Anderson, and Trevor (April) Anderson. 12 Great Grandchildren, Elizabeth, Kylie, Isabella, Jett, Carson, Conner, Everett, Harrison, Rhea, Hazel, Sepp, and Palmer. 1 Sister Nora (Alfred) Nelson, Fargo. 1 Brother Norman (Lyla) Diede, Fargo. Ruth was preceded in death by Milbert Fischer, Alfred Tollefson, (Parents) Henry, and Martha Diede. (Brothers) Royal, Calvin, Arnold, Clarance, Lawrence, and Aaron. (Sisters) Ella, Irene, and Verna.

The family of Ruth Tollefson created this Life Tributes page to make it easy to share your memories.

Send flowers to the Tollefson family.