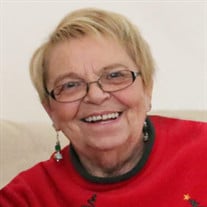 Ruth's service will be livestreamed here: https://vimeo.com/684776671 Ruth's Tribute Video can be viewed here: https://www.tributeslides.com/tributes/show/Y7KNXM2SJ884TWJQ Ruth Henrietta (Etterman) Steen, 85, Fargo, North Dakota, died Saturday, February 12th at Mapleview Memory Care, Fargo. There will be a Celebration of Life Service at 2:00 pm (CT), Friday, April 1, 2022, at Hanson-Runsvold Funeral Home, Fargo. The service will be livestreamed on the funeral home website Ruth Henrietta Steen was born February 9, 1937, in Beeville, Texas. She was the tenth child of 12 to Adolph and Annie (Penner) Etterman. She spent her childhood traveling and living seasonally between North Dakota and Texas with her family. Ruth married Ronald O. Steen on November 2, 1958, in Edinburg, ND. Ron was a meat cutter and they moved around the area quite a bit the first ten years of marriage with stops in Fargo, Elbow Lake MN, Grand Forks, Minot, Mandan, and Bismarck, eventually moving to the Minneapolis area in 1969 where they lived until 1984 when they moved to Fargo. Ruth was a stay-at-home mom while their son was growing up and started working later in life. She worked in the deli department of Cash Wise until the Southgate Hornbachers opened in 1994, where she was one of the first baristas in the espresso bar. She remained at Hornbachers in various departments until her retirement in 2015. She is survived by a son Terry (Laura McDaniel) Steen, Fargo; two grandsons, Davis (Hannah) Steen, Minneapolis, and Crosby Steen and his fiancé Sydney Wight, Mahtomedi, MN. She is also survived by 3 brothers Paul (Marie) Etterman, James (Karen) Etterman, Simon “Pete” (Delores) Etterman, and 2 sisters Phebe Ratzlaff and Annie Bergley. She was preceded in death by her husband Ronald; parents AG and Annie Etterman; three brothers, Edwin (Irene) Etterman, Herb (Anna) Etterman, and Richard (Eileen) Etterman and one sister Gertrude (Walter) Wellman.

The family of Ruth Henrietta Steen created this Life Tributes page to make it easy to share your memories.

Send flowers to the Steen family.