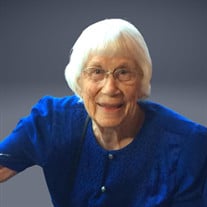 View Ruth's Tribute Video Here: https://www.tributeslides.com/tributes/show/53QDJW2WDRD4JTMP Ruth Hellem, 94, was the 2nd daughter of 3 children born to Ragna (Anderson) and Ole K. Opsahl on October 9, 1927. She died in her home in Fargo early December 22, 2021. Ruth continued her education in Barnesville, Minnesota, through high school. Then she moved to Fargo to attend Business School and joined the Clerk's Office at the Cass County Courthouse. She met her husband, Orlie, while roller skating out on a Friday night. He courted her for 2 years, picked out the engagement ring himself, and eventually they married on May 6, 1950, at Little Bethany Lutheran Church in Rothsay, Minnesota. During the ceremony, there are was a downpour and many people remember getting stuck in the mud. The rain was lucky for them, as they were able to raise 4 children and spend 65 adventurous years together. They worked great as a team! She was avid about sewing drapes, curtains, and clothes. They even reupholstered a couch that looked like a professional did it. She would design a project, and Orlie would build or fix it for her. Their cottage blew away in a tornado, and they rebuilt it together! Ruth ran for Clerk of Court for Cass County in Fargo, North Dakota, where she returned after raising their children. Orlie built a triangle Election Sign, large enough to barely fit on top of her car. She won her 2nd term to serve between 1975-1983, as the Clerk of Court in Cass County in Fargo, ND. Orlie and Ruth were "snowbirds" after her retirement for over 20 years. Then, she continued her artistic endeavors, including putting puzzles together, stained glass, knitting and crocheting afghans, dish towels, and cooking for Orlie. She was smart and creative, and loved seeing her great-granddaughters this past summer. Her namesake is Coralise Ruth and Cordelia Lane, who was born on her birthday, 93 years later. They had a total of 5 grandchildren and 6 great-grandchildren. Ruth was preceded in death by her parents, her brother (Stanley), sister (Millie), and her beloved husband, Orlie. She is survived by their children, Larry(Lupe) of Arizona, Janet of Fargo, Roger(Linda) of South Carolina, and Peggy of Fargo. She loved seeing her nieces (Mary and Jean) on her last birthday. She had 4 terrific nephews (Dean, Troy, Wade, and David). We will continue to mourn our great loss for years to come. Condolences and memories may be shared at www.hansonrunsvold.com Arrangements entrusted to Hanson-Runsvold Funeral Home – Fargo, ND

The family of Ruth Orlean Hellem created this Life Tributes page to make it easy to share your memories.

Send flowers to the Hellem family.