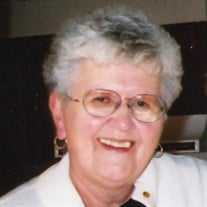 Ruth Hagen, 88, of Fargo, ND, passed away on Wednesday, March 3, 2021 at Kinder Care in West Fargo, ND under the care of Hospice of the Red River Valley. Ruth (Thykeson) Hagen was born in Portland, ND on October 6, 1932 to F. Ebenhard and Olga (Rud) Thykeson. She was baptized and confirmed at Bang Lutheran Church. She attended rural grade school. She enrolled in high school at Oak Grove Lutheran School graduating in 1950. She attended two years at Mayville State Teachers College. She began student teaching in the Aal area SE of Mayville, rural schools in Enger Twnsp , Kelso, and Primrose #3 schools. Her last school was her home school. She met Marvin Hagen in the Christmas of 1954 and were married November 26, 1955. They had three children, Peter, Mark and Marcia. When living in Grand Forks, they joined Calvary Lutheran Church where she was active in Church Women, Circles, and Altar Guild. Ruth was a "stay at home mom" with three youngsters. She was a great mother and drove all 3 kids back and forth to the skating rink for hockey and figure skating. The children all graduated from Central High School. Ruth made several trips to Portland to help Marvin's parents, Peder and Cora, with cleaning, visiting, and she enjoyed just spending time with them. She took oil painting lessons through the park board and became a very talented painter. She enjoyed movies and musical theater performances. She enjoyed playing Scrabble with Marvin, crossword puzzles and loved playing MN Rummy card games. She also enjoyed sewing, needlework and crocheting afghans. She liked wall papering and painting walls in their rental properties and helped with managing as well. She enjoyed meeting new people and reaching out to visitors to make them feel welcome. She was a very caring person to so many throughout the years. She never missed sending birthday, anniversary and Christmas cards to her family and her many friends. She enjoyed being at Maple Lake cottage and was very active with friends and being involved with church in Mentor. Ruth loved her grandchildren so much. She loved having the grandsons visit at the lake and enjoyed sending them to Breezy Point with some money to buy candy. She loved watching and listening to the loons and had a special loon that would stop by often. In 1984 they moved to Arizona and joined St. Peter Lutheran church. Ruth was active in ALCW, circles and other committees and made many lasting friends. She enjoyed the church sponsored bus trips to places in Arizona, California, Crystal Cathedral, and Universal Studios. They enjoyed traveling to Alaska and Norway. They have so many good memories. Ruth was diagnosed with Parkinson's in 2008 and she remained active for several years. They enjoyed their 27 years in Arizona, with summers at Maple Lake. In 2011, they moved to the Heritage House in Fargo after selling the lake place. Ruth moved to Kinder-Care, an assisted living home, in 2016. The family would like to thank the staff at Kinder Care & Hospice for the loving and excellent care they provided to Ruth. Ruth was preceded in death by her parents, and brother Kenneth. She is survived by husband Marvin of Fargo; her children, Peter (Mary Sue) of Prescott Valley, AZ; Mark (Laura) of Thompson; Marcia of Fargo; her grandsons, Nicholas (Dana), Travis (Lindsey), Christoffer, Ian (Chelsa), Joshua, and Michael (Kristen) Schlenker; eight great-grandchildren; brother, Truman, Mayville; sister, Kathryn and brother- in-law Leon Erickson, Warren, MN; sister-in-law, Shirley, Portland; as well as many nieces and nephews. A funeral service will be held at a later time.

Ruth Hagen, 88, of Fargo, ND, passed away on Wednesday, March 3, 2021 at Kinder Care in West Fargo, ND under the care of Hospice of the Red River Valley. Ruth (Thykeson) Hagen was born in Portland, ND on October 6, 1932 to F. Ebenhard and Olga... View Obituary & Service Information

The family of Ruth Hagen created this Life Tributes page to make it easy to share your memories.

Send flowers to the Hagen family.