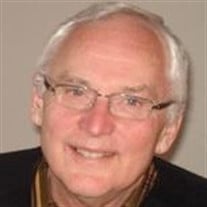 Tony's Tribute Video can be viewed here: https://www.tributeslides.com/tributes/show/7LZW78L775Y35KCX Ronald A. “Tony” Kost, 78, passed away January 12, 2021, at Sanford Health, Fargo. Tony is survived by his wife and love of 37 years, Susan (Swanick), Fargo, four children, David, Kathy (Bill) LeDoux, Nancy Kaeding and Susy Kost, ten grandchildren, four great grandchildren, sisters Judith (Stan) Knecht and Holly Beattie and uncles John Gregory (Dagmar) Kost and Robert Kost. Tony was born October 31, 1942 to Ronald L. and Gladys (Stempson) Kost. The Kost family lived in Downer, MN, where Tony’s father, grandfather, and uncle’s owned Kost Brothers: then a concrete block and gravel company. In 1945 Kost Brothers purchased a Ready Mix Concrete Plant in Moorhead, MN and soon after moved their office and families into Moorhead. Tony attended Saint Joseph’s Catholic School and graduated from Moorhead High School. In 1960 Tony married Peggy (Brennan) Hilleboe, and they soon had 4 children. Tony worked beside his Dad at Kost Brothers, and when his father retired in 1975, he turned the business over to Tony. Kost Brothers, Inc. expanded under Tony’s leadership to include Ready Mix Plants, Gravel Mines, Excavating and Trucking Companies throughout Eastern North Dakota and Western Minnesota until it was sold in 1993. Tony did not retire with the sale of Kost Brothers. He focused his attention on buying and developing real estate in the Fargo area and spending time with his family and friends. In 2013 Tony decided it was time to get back to doing what was in his blood. With his business partner Jeff Eberhardt and his daughter Nancy, Kost Materials set up a Ready Mix Plant in South Fargo. Kost Materials now has operations in Fargo, West Fargo, Audubon, Jamestown, and Grand Forks. Tony was original and authentic. He loved Sunday lunches with family, his wife Sue, going for rides, popcorn parties with his grandkids, Pelican Lake, the Bee Gees and hanging out with his buddies. A private family service will be held.

The family of Ronald "Tony" Kost created this Life Tributes page to make it easy to share your memories.

Send flowers to the Kost family.