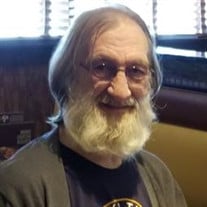 On Sunday, January 26, 2020, Roland Wayne Kerr (71) of Fargo, North Dakota succumbed to cancer after more than 6 months of bonus days beyond the dire prediction of his oncologist a year ago. Throughout his life and including his final days, Roland basked in the moments where he was able to make those around him laugh – whether it was from one of his jokes or as a result of his infectious, memorable laugh never mattered to him, so long as the world was a bit more joyful for those few moments. Roland was born in Grafton, ND on November 8, 1948, the first of Angeline and Reginald Kerr’s five children. Raised on the family farm, he was always seeking innovative means to make chores easier, while excelling at gardening and music. After graduating high school and a brief stint in college, Roland joined the Navy and served our country from 1968 to 1972 as a jet engine mechanic on the USS America and USS Constellation during the Vietnam War. The sudden and unexpected loss of his father in 1969 was a defining moment in his life. After being honorably discharged, Roland resided in California until 1991. He worked a variety of jobs – making clubs for Golfcraft, bringing smiles in his Pink Panther costume and creating elaborate balloon displays for Fantasy World, and earned his Associates of Arts in Small Business Administration while selling Christian books. In 1984, he began a more than 15-year career as an estimator in the construction industry. He had high hopes and big dreams for all the businesses he worked in and was emotionally invested in the people, projects, and potential growth of each company. Roland married Patricia Bryan in 1973; they had two children together. After divorce in 1989, the tumultuous cycles of the construction industry and various relationships created memorable pursuits and adventures in California, Nevada, and Kansas. He landed in Colorado in 1993. During the upcycle of construction through the 90’s, Roland enjoyed building on relationships and skills gained during the California boom years to positively impact the industry in Colorado, while spending time with both his children during their teen years. He was a happy, proud father, attending award ceremonies, going to the stock car races, watching football games, and building model railroads together. Memorable construction projects include the Sanctuary Golf Course and Gilpin County Fairgrounds. Migraines and depression became severely debilitating the last 20 years of his life. Roland returned to North Dakota in 2002 to be closer to his family and sought the care of the Fargo VA Hospital. The move blessed him with opportunities to spend time with extended family and get reacquainted with his siblings and mother as an adult; he traveled several times a year for treasured visits with his children and grandchildren. Roland met his long time significant other, Pam McGuire, nearly 15 years ago at the Trollwood Apartments’ mailboxes and enjoyed his final months with her at the Bethany Retirement Home. Roland’s hobbies included Rio Grande model trains (and his vision for the “Rol Grande” layout), reading historical fiction (with a particular love for westerns and British naval history), sporty cars (had to be blue), gardening, music, and a good game of pinochle or cribbage. His children and grandchildren are the great pride of this life – though his entertainment system with large TV may be a close second. Roland was preceded in death by his father Reginald Wheeler Kerr and is survived by his mother Angeline (Wolf, Kerr) Benn; his siblings – brothers Daniel, Mark (Janelle), and Philip Kerr and sister Audrey (Dwight) Faul; his daughter Dawn (Alan) Culley and son Reginald (Heather) Kerr; and five grandchildren. Never one for elaborate goodbyes or large formal indoor gatherings, Roland’s spirit will be honored through an informal celebration of life family gathering later this year when the flowers are in bloom and children are at play. His ashes will be interred at Soper Cemetery near Fairdale, ND. His family wishes to thank Hospice of the Red River Valley for their exceptional care in the final year of his life.

On Sunday, January 26, 2020, Roland Wayne Kerr (71) of Fargo, North Dakota succumbed to cancer after more than 6 months of bonus days beyond the dire prediction of his oncologist a year ago. Throughout his life and including his final days,... View Obituary & Service Information

The family of Roland Wayne Kerr created this Life Tributes page to make it easy to share your memories.

Send flowers to the Kerr family.