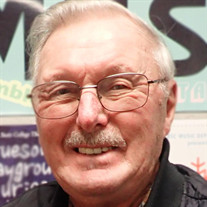 Rodney Kent Thompson passed away quietly after a short hospital stay on May 24, 2019 at Sanford Medical Center, Fargo, ND. Interment will be at Sunset Memorial Gardens, Fargo, ND. The family wishes to recognize the Fargo Sanford Medical Center Doctors, Nurses, Aides, and staff for their compassionate care of Rodney in the month of May. Rodney was born on December 7, 1932 to Raymond and Myrtle Thompson. He grew up on a farm near Woods, ND between Davenport and Leonard. He loved farm life and growing up on the farm. He worked with his father Ray on the farm and attended elementary school in Woods, and graduated from Leonard High School. Rodney joined the Army and served in the United States and Germany. When he finished his tour in the Army, he decided it was time to return to North Dakota, get married and settle down. Marie I. Greuel and Rodney were married on November 28, 1958. In 1962 they purchased a home in West Fargo where they lived until their passing. After moving to West Fargo, Rodney worked for Swanston Equipment and Acme Welding (now Praxair) in Fargo and farmed part-time alongside his father. Rodney also enjoyed flying, which he did when employed with Swanston. When farming became a more dominant part of his life, Rodney left Acme and farmed alongside Marie. He also owned and operated over the road trucks, enjoying the work and seeing new sights. Rodney and Marie enjoyed their relationships with their many neighbors on Elm Street in West Fargo. Dad also enjoyed the farm neighbors over the years in the Leonard/Davenport/Kindred area. When Marie became ill in 2010, Rodney set other things aside and cared almost daily for her at home and visiting when she was in nursing homes. Marie passed away on January 29, 2014 after a short cancer battle. Rodney continued to live on Elm Street in West Fargo spending time with his children and grandchildren. He traveled with his grandchildren on local day trips and to Medora and the Black Hills. He attended as many school and sports activities as possible. As recent as mid-February he had traveled to Center, ND to watch his two grandsons play basketball. Rodney is survived by one daughter, Rhonda and her children, Alex, Christopher, and Matthew, Fargo, ND; one son, Mark (Laurie) and their children, Sarah, Benjamin, and Michael, Mandan, ND. He was preceded in death by his parents.

The family of Rodney Kent Thompson created this Life Tributes page to make it easy to share your memories.

Rodney Kent Thompson passed away quietly after a short hospital...