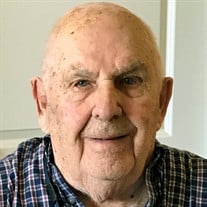 Robert (Bob) Gordon Streed, 97, life-long resident of Fargo, passed away on Saturday, March 21, 2020 at Bethany on 42nd under the care of Ethos Care Hospice. Bob was born to Arthur and Rosalind (Wentland) Streed on April 22, 1922, in Fargo, ND. He graduated from Central High School in 1940. After high school, Bob went out to Washington State to build ships through the FDR work program. He was drafted in 1942 serving with the 34th Infantry in a mortar platoon and spent his 21st birthday on a ship to North Africa. From there his Infantry moved on to Sicily then Italy where he spent the rest of WWII. During this time he participated in the battles of Anzio, Cassino, and the liberation of Rome. He was wounded and received a Purple Heart along with many other citations. After his return from the military, he worked at the Fargo Post Office until his retirement in 1980. He married Helen Tellinghusen Bohrer on October 14, 1948, and adopted her 4 daughters: Joanne, Valene, Sandra, and Jaqueline. Bob loved family picnics, walking (he was an avid walker until the age of 93), fishing, sports (he attended many of his grandchildren’s and great grandchildren’s events and was a huge Bison fan), spending winters in Arizona, and going to the casinos. Most of all he loved spending time with his family. When asked what he would want to most be remembered by, his response was,“That I was Grandpa”. Bob is survived by his daughters Joanne (Lowell) Senechal of Carver, MN and Sandra Opatril of Dilworth, MN; 16 Grandchildren; 23 Great Grandchildren; and 5 Great-Great Grandchildren with number 6 due in June. Bob is preceded in death by his wife, Helen; his parents; 2 daughters and their spouses, Valene (Richard) Anderson and Jaqueline (Dale) Perkins; son-in-law, Milton Opatril; grandchild, Karen; brothers, Arthur and Charles; and sisters, Minerva, Wenonah, and Lucille. Services will be held at a later date.

Robert (Bob) Gordon Streed, 97, life-long resident of Fargo, passed away on Saturday, March 21, 2020 at Bethany on 42nd under the care of Ethos Care Hospice. Bob was born to Arthur and Rosalind (Wentland) Streed on April 22, 1922, in Fargo,... View Obituary & Service Information

The family of Robert Gordon Streed created this Life Tributes page to make it easy to share your memories.

Send flowers to the Streed family.