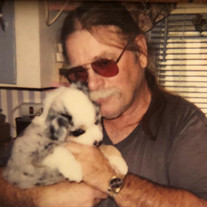 Robert James Romaine, 72 of Ottertail, Minnesota, passed away at Sanford Medical Hospital in Fargo, ND on Friday, March 13, 2020. Robert was born in Mt. Kisco, NY on June 16, 1947 to the late Robert and Marian (Tripp) Romaine. Robert met his wife, Linda Krabbenhoft and moved to Felton, MN in 1976. He became a truck driver, driving for several trucking companies before leaving the open road to start a bicycle retail store in Detroit Lakes in 1984. After closing the bicycle shop in 1997, he went back on the open road again until he retired in 2009. Robert lived an adventurous life, starting out growing up on a houseboat. He hitchhiked across the country during the late 60’s, loved music, and hung out with several famous musicians. Robert loved to read and was a huge history buff, including the history of guns. He loved the outdoors and would ski, bike, camp, and canoe. Whenever possible, he would take the family out to share in these adventures with him. The heart of it all was his family which he focused on the most, including his furry friends. Robert leaves behind two sons, Raft Spaner, Derby, CT and Aaron (Tricia) Romaine, Fargo ND; daughter, Leigh Anne Romaine, Cleveland, OH; 2 grandchildren, Bridger and Nyah Romaine; sister, Janet Romaine, Zephyrhills, FL; niece, “Little Janet” Romaine, Zephyrhills, FL; nephew, Lenny Romaine, Buffalo, NY; and previous wife, Linda Romaine, Audubon, MN. He was preceded in death by his parents, Robert and Marian Romaine; brother, Roger Romaine; grandson, Dylan Romaine; nephew, Danny Romaine; and previous wife, Lori Spaner. Video Tribute may be viewed at https://www.tributeslides.com/tributes/show/F3ZGPDRCBQCCKG9Q

The family of Robert James Romaine created this Life Tributes page to make it easy to share your memories.

Send flowers to the Romaine family.