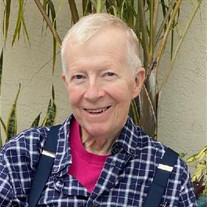 Robert's service can be viewed here: https://vimeo.com/599756313 July 7, 2021 Robert is at peace and released of his pain from dealing with cancer. Robert Jay Dregseth was born May 19, 1949 to Caroline and Irving Dregseth. Robert lived his entire life in Fargo, ND. He was part of the last graduating class from Fargo Central in 1967. He enjoyed telling stories about the fire at Central High and the senior year sharing Fargo North High. Some of them might actually have been true. Robert earned degrees in Wildlife Management from North Dakota School of Forestry in Bottineau, ND and Entomology from North Dakota State University in Fargo, ND. He served in the US Army Reserves in the late 1960's through the 1970's. Robert's career was more than 40 years as a Research Specialist in the Entomology Department at NDSU, working with ways to control sugar beet insects. Robert married Marge (Marjorie Johnson) in August, 1981. This was the only month that worked around his work and hunting schedule. They are parents to two amazing children, Melissa and Trent. Robert was hard working, kind and patient. He learned a lot of handyman and farming skills from working with his uncle Chester. He learned best by just jumping in and tackling the task. It seems instructions are for rookies. He met and developed real relationships and long lasting friendships with the farmers, fellow researchers and students he worked with during his years studying sugar beet root maggots. Robert was so proud of his wonderful children and took great joy in the loving, hard working, compassionate adults they are. He enjoyed bragging and telling stories about his Grand-dogs, Clark, Lewis, Apollo and Belle. Robert was passionate about many things. He particularly loved the quality time spent camping and fishing with his family. Even when Melissa caught more fish than he and Trent combined. Trent was less enthusiastic. Robert also cherished hunting trips with his family and friends. Robert began experimenting with baking treats and desserts. His philosophy was to regard a recipe more as a guideline which often made his treats even better. Robert's lessons and the memories made will live on and help sustain his wife Marge, daughter Melissa (Steven) Bischof, son Trent (Charlotte Jameson). Additional family who continue to love and hold on to precious memories of Robert include his mom, Caroline, brother Richard(Jody), sister Marilyn (Steve) Lewandowski, In-laws Arlene, Sylvia, Kory, Mary, Nancy, Todd, Jennifer and Andrew, nephews, nieces, cousins and so many others. Robert's family (especially Marge) would like to acknowledge and thank the support and love shown by family and friends during Robert's cancer diagnosis. I cannot name each individual as there are so many and some of you may not even be aware of the support you provided at the moment it was needed. A special thank you to the caring staff, nurses, and physicians from Roger Maris Cancer Center and Sanford Hospice who treated Robert so well. There will be a service at 1:00 pm at Bethlehem Lutheran Church, Fargo ND, and celebration of Robert on September 3, 2021. Robert's Tribute Video can be seen and copies ordered here: https://www.tributeslides.com/tributes/show/MR4L2NJK4GQNQ62X

Robert's service can be viewed here: https://vimeo.com/599756313 July 7, 2021 Robert is at peace and released of his pain from dealing with cancer. Robert Jay Dregseth was born May 19, 1949 to Caroline and Irving Dregseth. Robert lived his... View Obituary & Service Information

The family of Robert Dregseth created this Life Tributes page to make it easy to share your memories.

Send flowers to the Dregseth family.