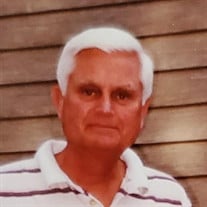 Bob's Memorial Service will be available at this link: https://vimeo.com/468702867 Robert (Bob) Younggren passed away on Monday, August 10th, 2020, at his lake home on Pelican Lake. He was born in Grand Forks, ND, on October 12, 1946. He grew up in Fargo, ND, and graduated from Fargo Central High School. He attended Wahpeton State School of Science and NDSU. While in high school and college, Bob won numerous trophies drag racing in the area and around the country. Bob was well known for his shooting and hunting expertise. He spent many happy hours hunting big game and birds in North Dakota, Montana, Wyoming, British Columbia, Alaska, Colorado, Argentina, and many more places. He was instrumental in drafting a bill, which passed the legislature under Gov. Olson, to establish a habitat stamp for North Dakota, which to this day, benefits the ND Game and Fish Department. Bob married Pam Palmer in 1968 and they were blessed with three daughters and, eventually, five grandchildren. He began his working career at Scheels on University Drive. After marriage, he began working for Federal Ammunition as a salesperson and professional trap shooter, covering six states. Pam, and daughter Jennifer, travelled often with him while he participated in ATA trap shoots in many states, representing Federal, with Bob usually winning the trophies in the professional class. He was proud to have received an invitation to participate on the United States Olympic Trap Team. After seven years, Bob resigned from Federal Cartridge to start his own sporting goods brokerage, Younggren Sales Company, representing Zeiss Optics, Weatherby Rifles, Hornady Ammunition, Puma Knives, Hodgkins Powder, Kershaw Knives, and many other lines. He made many friends in the sporting goods business and truly enjoyed this phase of his working career. A few years later, he had the opportunity to purchase Ferguson Brokerage Company, a food brokerage covering three states. His brother John and good friend Jim Reynolds began working with Younggren Sales Company, as Bob transitioned into the food business. Bob then worked at the food brokerage until he retired. Bob loved being able to take his family on trips. We all have many good memories of those fun times. Marco Island and Sanibel were annual winter vacation spots for the family for many years. Skiing trips to Aspen, Big Sky, Lutzen, Breckenridge, or Keystone were also on the annual calendar. In addition, the family joined Bob while he attended food brokerage functions in New York, San Francisco, New Orleans, Atlanta, Chicago, Spanish Bay, Carmel, Pebble Beach, Monterey, Portugal, Hawaii, and other fun spots. Each of his daughters would tell you they had the best dad ever. His Pelican Lake home was his preferred spot to be, and he really enjoyed all the many times the whole family could be there together. Bob enjoyed surprising people and he would often take the grandkids for a ride and come back with go carts, dune buggies, four wheelers, paddle boats or new water equipment. They would go on turtle and frog hunts, nature hikes, feed and identify birds and other wildlife, learn gun safety and shooting skills, etc. Popcorn and movie nights were a staple at the lake. The grandkids adored their time spent with Grandpa Bob. Bob was preceded in death by his daughter Jill, his sister Susan, his brother John, parents Everet and Norma, and his brother-in-law Stephen Palmer. Survivors include his wife Pam; daughters Jennifer (Monte Hannestad) and Jacqueline (Ryan George); grandchildren Jayden, Hope, Reese, Brooke, and Lainey; step-grandson Logan Hannestad; sister Jane (Mike Sweeney); and numerous nieces and nephews. Robert's Tribute Video can be seen and copies can be ordered at this link: https://www.tributeslides.com/tributes/show/BRM6BMR7CGMR6ZJ4

The family of Robert "Bob" Everet Younggren created this Life Tributes page to make it easy to share your memories.

Send flowers to the Younggren family.