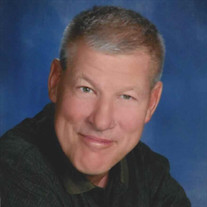 Robert (Bob) Pratt, age 73, passed away unexpectedly at Essentia Health on May 16, 2020. Bob, son of Phyllis and William (Bill) Pratt, was born September 18, 1946 in Fargo, ND. Bob grew up in Fargo and became somewhat of a Southside icon at Lindenwood Park and South University Drive where he could watch the trucks on I-94. If there was a construction site nearby, he would be there. Our family would like to thank all those contractors who kept Bob in hard hats, construction magazines and calendars. T.F. Powers, Collins, Northern Improvement, Meinecke-Johnson, Ames Sand and Gravel, Jones, Industrial Builders, Master Construction, City of Fargo and all the wonderful employees that took the time to make Bob feel welcome. We’re sorry if we forgot anybody. A special thank you to the Vocational Training Center and Fraser for working with him and watching over him all these years. In 2014, Bob was honored with the “Outstanding Citizen of the Year” by the Metro Area Mayors Committee for People with Disabilities. Bob lived at Fraser on South University and worked for the Vocational Training Center for over 45 years. He loved to do the tours of the facility and brag that his dad was one of the people that got it started. His niece, Sara, says it best, “Many of you might know the book “Mike Mulligan and His Steam Shovel (Mary Anne)”, it is a story based on loyalty, love and the town of Popperville. It was Bob’s favorite book. Seems fitting based on the life he lived – not only was he loyal and loved to the fullest, but hard work and heavy machinery were both passions for him. From a very early age, I remember Uncle Bob talking to me about Mary Anne and working so hard to get me, my brother, and my son 30 years later to say “truck”. As I have reflected the past few days, it’s amazing how many memories I have of him growing up. In my adult years he really taught me about love, passion, joy, and hard work. Hard work: Bob had limitations physically but he never slowed down. He would work harder than most people I know whether it was chipping ice in the winter, raking leaves in the fall, cleaning the beach in the summer, collecting cans to donate to the church organ or making construction stakes & gingerbread houses at the VTC. He was always busy. Joy: Bob enjoyed people. My whole life countless numbers of people would make the connection of me to Bob. They would have some story to tell. He knew SO MANY PEOPLE and genuinely wanted to learn about each one of them. Passion: “Don’t judge a book by its cover”, if you knew Bob you knew his love of music – specifically from the 60’s, 70’s and into the 80’s. When I was younger I remember going to grandma & grandpas, and he would be sitting in the house or in the truck at Pelican Lake listening to the radio. He had an uncanny knack of hearing a song, and within only a few seconds of the song playing he could tell you the year it was released, the title and artist. He still could do it 2 years ago at Thanksgiving when I introduced him to Amazon music. It always amazed me. Love: He loved his family and friends – how lucky were we? He was a fixture at family gatherings always making sure he was checking in that he was on his best behavior. One of the last times I saw Bob was at Christmas this year when we attended church. He loved to SING and he sang in a pure and unfiltered way and didn’t care if he was on tune – in his mind he sounded great. He also loved to tell us stories about his friends and each year when I made him his annual calendar we would carefully select each picture (only 1 per page – I tried getting fancy on Shutterfly one year and he was less than impressed). As he selected each picture, I learned about the construction workers that were so kind to him, his friends & staff at Fraser, employees and staff at the VTC and others who surrounded him. He loved deeply and we all loved him right back. This came at us fast and unexpected – the loss has left a hole in our hearts that will be hard to replace.” Bob was preceded in death by his parents, and his brother, J. Douglas. Bob is survived by brothers, Brad (Bev) Pratt and Greg (Julie) Pratt; three nieces and nephews, Sara (Eric) Gjerdevig, Steve (Gracia) Pratt and Marcus Pratt (Alexandrya Thiesing, Fiancée); four great nieces and nephews Jordyn and Jacob Gjerdevig and Annalyse and Camille Pratt; his aunt and friend Patti Pratt. Memorials are preferred to Fraser, Ltd., Vocational Training Center and First Congregational Church United Church of Christ, all in Fargo. A memorial service will be held in the late summer or early fall when it is safe to gather in larger numbers.

Robert (Bob) Pratt, age 73, passed away unexpectedly at Essentia Health on May 16, 2020. Bob, son of Phyllis and William (Bill) Pratt, was born September 18, 1946 in Fargo, ND. Bob grew up in Fargo and became somewhat of a Southside icon... View Obituary & Service Information

The family of Robert "Bob" Crosby Pratt created this Life Tributes page to make it easy to share your memories.

Send flowers to the Pratt family.