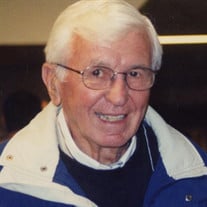 Robert “Bob” Hamblet of Fargo died peacefully in his sleep on October 9, at Rosewood on Broadway. Bob was born on August 2, 1925, in North Tonawanda, New York, the son of George E. Hamblet and Louise L. (Pfanner) Hamblet. He graduated with a Bachelor of Science degree from Ohio Wesleyan University in 1947 and received a Master's degree in Health and Physical Education from the University of Wisconsin, where he met the love of his life, Jean, while singing together as members of the Presbyterian Student Center church choir. In 1952, Bob and Jean got married in that same chapel. Bob was recruited by the University of Nebraska to teach in the Department of Physical Education and to coach the Cornhuskers golf team. After a few years in that position, he was hired as the Director of Physical Education for the Grand Island Nebraska Public Schools. Bob’s highest calling, though, was to be a counselor. He took his first counseling job in the Grand Island schools, where today a scholarship has been established in his name. In 1964, he received a scholarship to attend the University of North Dakota to obtain a second master's degree in Guidance and Counseling. Upon graduation from UND, he was hired by the Fargo Public Schools as a visiting counselor. He was later elevated to Director of Guidance and Counseling for the Fargo schools. He ended his career in the position of Principal of Jefferson Elementary School. He retired in 1986 and spent the rest of his life traveling the globe with his beloved wife, doing volunteer work and spending time with his family. Visitation will be from 5-6 pm, and memory-sharing and prayer service will begin at 6:00 pm on Sunday, November 3, at Hanson-Runsvold Funeral Home in Fargo. A memorial service will be held at 2:00 pm on Monday, November 4, at First Presbyterian Church in Fargo. Bob is survived by his wife of 67 years Jean (DeYoung) Hamblet, Fargo, ND; their children Gary (Gail) Hamblet of Manhattan Beach, CA, Kathi Hamblet of San Miguel, Mexico, Kris Cropsey of Minneapolis, MN, Karla (Bob) Talavera of Santa Clarita, CA, and Kelley (Doug) Switzer-DeMars of Orlando, FL; siblings Lois (Sherwood) Kramer and Ruth Herring; and beloved grandchildren Sarah (Matt) Breismeister, Shauna (Josh) Dean, Tyler Cropsey, Bobby (Cristi) Hamblet, Cameron (Addy) Cropsey, Garrett Cropsey, Mikayla Switzer and Jacoby Switzer. In lieu of flowers, please consider a donation to Big Brothers Big Sisters of Fargo-Moorhead, Project Legacy of Rochester, MN (Projectlegacymn.org), or Stephen Ministries, a one-to-one, lay caring ministry, which Bob brought to the First Presbyterian Church in Fargo.

Robert &#8220;Bob&#8221; Hamblet of Fargo died peacefully in his sleep on October 9, at Rosewood on Broadway. Bob was born on August 2, 1925, in North Tonawanda, New York, the son of George E. Hamblet and Louise L. (Pfanner) Hamblet. He graduated... View Obituary & Service Information

The family of Robert "Bob" Hamblet created this Life Tributes page to make it easy to share your memories.

Robert “Bob” Hamblet of Fargo died peacefully in his sleep on...

Send flowers to the Hamblet family.