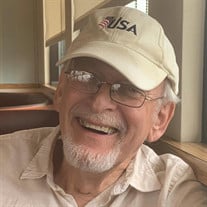 Bob's Funeral Service will be streamed here: https://vimeo.com/497757042 Bob's Tribute Video can be viewed and copies ordered here: https://www.tributeslides.com/tributes/show/NJW67J2244CTQ8CC Robert “Bible Bob” Gauthier, 77, was born to Chester Gauthier and Ann (Schmidt) on October 22, 1943 in Red Lake Falls, Minnesota where he attended school and was raised on the family farm. Bob graduated Lafayette High School and obtained his certificate of drafting in Thief River Falls, MN. He proudly served in the US Army and 18th Army Band during the Vietnam War from 1965 to 1967 and was honorably discharged. In October of 1969 he married JoAnn Kargel and together they raised their three children in Moorhead, MN. They divorced in 1996. Bob retired from the US Postal Service in 2000, after 29 years of faithful service. In his retirement he enjoyed working part time at ADESA automobile auction, performing outdoor maintenance for his property manager Goldmark, and worked other various outdoor maintenance jobs. He enjoyed playing his trumpet and singing with the Prime Time Choir. Bible Bob was a faithful servant of God and was devoted to his family. He earned his nickname from his love of scripture and his amazing ability to memorize scripture and their references. His extraordinary generosity was just recently revealed by the discovery of his daily charitable contributions. Bob was a humble man who unknowingly touched the lives of many. Bob entered into the Lord’s presence on Saturday, January 2, 2021. He is survived by his sons, Scott (Rachel) Gauthier and John (Cara Tonnell) Gauthier; his daughter, Christi (Wade) Pierce; 8 grandchildren; 4 step grandchildren; his former wife, JoAnn (Kargel); a brother, Jim (Cindy) Gauthier; a sister, Gerry Hundt; and many special cousins, nieces, and nephews. He is preceded in death by his parents, his sister Marlys Swenson, brother-in-law George Hundt, and his granddaughter, Karina Tulea. A celebration of his life will be held Friday, January 8th, 2021 at Heartland Community Church, 1751 Main Ave, West Fargo at 9:00 AM. Visitation will begin at 8:00 AM. Masks and COVID protocol will be required at the service and a live stream service will be available through Hanson-Runsvold Funeral Home’s website. Burial will be at Fargo National Cemetery.

The family of Robert "Bob" F Gauthier created this Life Tributes page to make it easy to share your memories.

Send flowers to the Gauthier family.