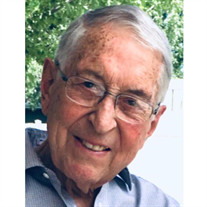 The Celebration of Robert's Life will be livestreamed here at 11am, Tuesday, June 8: https://vimeo.com/560126351 Robert “Bob” James Alin, husband, father, grandfather, brother, uncle, friend, businessman and philanthropist, died peacefully in his home Thursday, May 28, 2020, surrounded by his children. Bob was born in his grandmother’s house in Lamoure, ND, on December 1, 1929 to Clarence and Evelyn Alin. While growing up in Lamoure, he made lifelong friendships, played football, sang in the choir (beautiful voice) and began working at age nine delivering the Fargo Forum and Saturday Evening Post. He worked as a janitor and all-around helper at the local creamery, grocery and bank. At the age of twelve, he began working as a farm hand and was harnessing horses! The Lamoure County Road crew hired him at fifteen where he drove a D8 Caterpillar! He also worked as a funeral home assistant and as a clerk at Groth Hardware. He graduated from Lamoure High School in May 1947 and in the fall he attended NDSCS Wahpeton where he played football. He soon purchased his first car, a 1947 Plymouth convertible he purchased from his pastor. On October 15, 1950 he married the one and only true love of his life Doris Elaine Persson from Edgeley, ND. They were happily married for 65 years until Doris died December 16, 2015. Bob served his country by joining the North Dakota National Guard in 1947 where he achieved rank of 2nd Lieutenant. He was called to active duty in December 1950 during the Korean War, where he served in Alabama, Georgia, and Texas managing logistics and taught map reading and land navigation. While in Alabama, their first child Cynthia was born in 1952. After returning to Lamoure, their daughter Julie was born in 1955. The following year, 1956, Bob’s father-in-law, Fred Persson, showed him a one line ad for a job at a Fargo Hardware Store. He applied and interviewed with Mr. Fred Scheel and the rest is history. Soon their home in North Fargo was built and their son John was born in 1963. Bob worked at Scheels tirelessly until his retirement in 1990. He was well known for his self-discipline, sense of loyalty to the business, sincerity, and kindness to colleagues and customers. He valued character over pedigree and looked for the good in each person he met and usually found it. He was admired for always being a gentleman with respect for all. Family and friends also enjoyed his wit and wholesome sense of humor. He was a 50 year member of Faith United Methodist Church in Fargo and served in many capacities over the years. He recently joined bethel in Fargo where he worshiped with his children and grandchildren. When Bob retired in 1990, he and Doris enjoyed retirement to the fullest. They traveled all around the world including Europe, Africa, Mexico and every state of the union expect for Alaska. They enjoyed many winters in California, Florida and Arizona. In 1991, Bob served his beloved state of North Dakota by traveling many miles over a three-year span. He met with community leaders and soon 51 communities had Dollars for Scholars Chapters proudly in place, where today over 40,000 individuals have been awarded scholarships. He served his communities of Fargo and West Fargo through many organization and committees. Salvation Army board, Cosmopolitan Club, American Legion, Beautification Committee of West Fargo, Fargo and West Fargo Chamber of Commerce, Yard of the month, Veterans Memorial Arena Project to name a few. Bob received many awards from business and community. Some include the Book of Golden Deeds, Dollars for Scholars Awards, Scheels awards, the North Dakota Community leadership award and many others humbly tucked away in his file drawer. He was passionate about giving back and supported more than 130 charities yearly. A few were Amistad worldwide, Dollars for Scholars, Salvation Army, Dakota Medical Foundation, Boys and Girls Ranch, YMCA, YWCA, Churches united, New Life Center, Boy Scouts of America, Cully’s Kids and many others. His passions included having his 1929 Ford Model A restored, which he drove in many parades promoting Dollars for Scholars, wood working where he made birdhouses, crosses and bible reading stands. He enjoyed skiing, hunting, fishing, camping, collecting pens and guns. He gardened tomatoes and flowers with the greenest thumb. His yard was featured on the soroptomists garden tour. He enjoyed sharing his pool, flowers and yard where many family memories were made. Bob’s greatest passion was his love for the Lord and love for family. He began each and every day at 4am with prayer, devotion and studying God’s word; he lived his life accordingly. To his family he always responded with the gift of unconditional love. His decency, sincerity and kind soul will stay with us forever. “Well done good and faithful servant.” Bob is survived by his three children, Cynthia (Richard) Jacobs, Julie Alin, John (Tracy) Alin; four grandsons, Billy (Stephanie) Jordan, Sam (Steph) Jacobs, Robbie (Ross) Kimm, and Hans Alin; two great-grandchildren, Spencer and Grace Jordan; sister, Lois Peterson, three sisters-in-law and many nieces and nephews. He was preceded in death by his wife, Doris, his parents, brother Dr. Jack Alin, three nephews and many brothers and sisters-in-law. His family expresses deep heartfelt appreciation for the tender loving care Hospice of the Red River Valley gave Bob. A special thanks to registered nurses Katie and Bobbie, along with Pastor Tom. Our deepest gratitude also is given to those who cared for him daily at his home this past year. We were sure each had a halo and wings! Their care and devotion will always be remembered. Memorials may be mailed to The Bob and Doris Alin Legacy Scholarship Fund: North Dakota Dollars for Scholars, 1200 Memorial Highway, Bismarck, ND 58504 or online at nddollarsforscholars.org, or a charity of your choice. Bob's Tribute Video can be seen here: https://www.tributeslides.com/tributes/show/46S8QRT77B5JD3BT

The family of Robert James Alin created this Life Tributes page to make it easy to share your memories.

The Celebration of Robert&#39;s Life will be livestreamed here at...

Send flowers to the Alin family.